I'm baaaaccckkk! Did you notice I was gone?
Probably not, since I was pretty good about having a post scheduled for pretty much every day I was gone. If you noticed I was missing, it would just have been in the lack of comments on your blog. Sorry about that.

But now I'm back, so the comments will start again! :-)

I had a great time while I was away. I was in MIAMI to watch the New Orleans SAINTS WIN THE SUPERBOWL!!!!!!!!!!!!!!!!!!!!! It was amazing!! If you're interested, you'll eventually be able to read more about how wonderful a time I had over in my personal blog - that is, when I get around to begging pictures off my family members.

As readers, things that might interest you: I saw Taylor Lautner. He was surrounded my bodyguards, and I therefore unfortunately did not get a picture of him, but he was looking MEGA HOT, and I was, like, a foot from him. :-)

Also, since I know next to NOTHING about football, my sister (who is and has been for the entirety of our lives a Saints fanatic) decided to help me out. 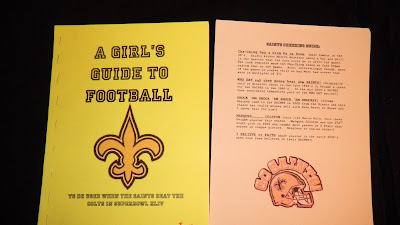 She made me a book that she titled "A Girl's Guide to Football: to be used when the Saints beat the Colts at SuperBowl XLIV." And let me tell you, it is AWESOME! I feel like I almost understand football now!
It also came with a Saints Cheering Guide. So that I would know when to scream what.

Okay, anyhow, I'm going to write all about it over at Vegan in the Land of Frog Legs and Cheese, but I just wanted to let you guys know that I'M BACK!!!! :-)
And so you can start expecting to have comments again! And tons of reviews, because I have been on a TON of airplanes lately and thus reading a LOT!!
Posted by brizmus at 3:43 PM
Email ThisBlogThis!Share to TwitterShare to FacebookShare to Pinterest
Labels: home

Welcome back ! I'm glad you had a ball at the Superbowl (lousy wordplay,I know). And that the snow didn't cause any plane troubles (or did it ?!).

And the book your sister made looks cooool ! How fun !

Sounds like you had a great time!! So cool to have watched the superbowl live! (And don't worry I don't know much about football either :P)

And you were ONE FEET AWAY from TAYLOR LAUTNER? Meeega Cool!! I'm officially jealous ;)

Sounds like you had a fab time! I know nothing about sport!

LMAO, I would get beat up by my 5 brothers for not knowing about football