I'm so excited to welcome Chris Wardle today here in Brizmus Blogs Books!! He's going to be guest posting about why he writes. He's on tour right now for his book, The Lighthouse of Mr. Tinfish. 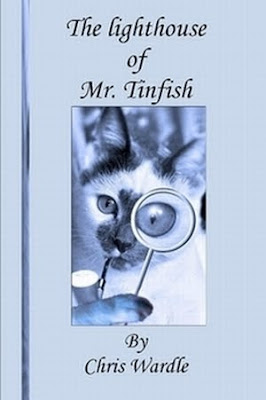 I discovered my passion for creative writing whilst living in a small village in Cameroon. It was my first oversees posting and I was a lone volunteer managing the construction of a water supply project.

The village was remote. There was no TV, telephone, or electricity. We did, however, boast a village chief who was the most powerful of all the witches in the region, and the villagers lived in fear of his dark magic. He was an incredibly old man, short and crooked looking. He wore a shirt and sarong. His huge pair of thick, black-rimmed spectacles looked like they’d been placed on his face with no particular attention being paid to where exactly his eyes were.

During my first week, the villagers were invited to the chief’s compound for a small feast. After the food we all formed a large circle and the elders began the ceremonial rituals. It started with the oldest man of the village calling on the ancestors to join us. After a lot of elaborate shouting from him, and the odd grunt from the rest of us, he threw some pieces of cola-bean on the ground. They landed the right way up showing that the ancestors were with us.

It was explained to me that the chief was to ask the ancestors for forgiveness. Some days earlier he had been walking through the village to his house. Probably due to the indiscriminate positioning of his spectacles, combined with some enthusiastic imbibing, he totally missed his house. Instead he ended up splashing around in the stream at the bottom of the hill. The cold water must have heightened his senses as he turned around and headed back. Again he absent-mindedly meandered straight passed his hut and slowly back toward the neighbouring town. When the search party found him later that evening he was in a different stream on the other side of the hill. Following this experience he concluded that the ancestors were annoyed with him, so decided a major ceremony was required.

This was just the first week! Consequently, for the first time in my life, I had a lot to write about, and began to really enjoy sending letters home about my adventures. I then decided to write a short story about the pop band that I had played in at college. I wrote it on scraps of paper, and found myself cutting out paragraphs from different pages and sticking them at the sides of others with duct-tape. The resulting collage of scribbling needed instructions to negotiate. After discovering the pleasures of this creative process I went on to write longer stories about my adventures in Cameroon and the subsequent places I’ve worked. A lot of my travels have since influenced the characters and adventures that I write about in ‘The lighthouse of Mr. Tinfish’ as well as the rest of the Mr. Tinfish Series.

About the Author:Chris Wardle holds a bachelor’s degree in physical geography as well as a Master’s degree for water supply in developing countries from Cranfield University in the UK.

Over the last ten years Chris has travelled extensively in developing countries working on charity projects in poor communities. He has been able to draw on his numerous experiences to inspire his creative works, particularly living for long periods in communities with different cultures in Africa and Asia.

An orphaned kitten in Northern Uganda was the inspiration for Mr. Choli’s character in the Tinfish series. He now lives in the UK with Chris’s family (via a few months with a foster family in France to organise his European passport). Please visit the Tinfish website at www.mrtinfish.moonfruit.com

Isn't his story of how he came to be a writer so much fun?!? If that doesn't make you want to go out and buy one of his books right now, well, I don't know what will.
Be sure to check out Chris at some of his later stops on the tour. they can be found here.
Posted by brizmus at 9:30 AM
Email ThisBlogThis!Share to TwitterShare to FacebookShare to Pinterest
Labels: guest post, tour

It always amazes me about the different cultures that are around the world. I'm so entrenched in my own that I often forget. What a great guest post!

Fascinating ! Everyone has its story, and that's something I've always loved.

Welcome Chris, a great post, it was nice to meet you.

Thank you for all of your kind comments. I've actually been on a last minute assignment in NE Cambodia to prepare a proposal for an NGO so have only just returned to the realms of internet access. I hope you enjoyed the Mr. Tinfish books. The stories involve a lot of adventuring by the quirky characters as they try to solve their problems, so may appeal to the inner-child of those who enjoy travel as well as a younger audience.