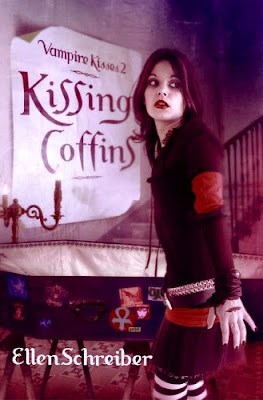 Who Should Read It? Tweens and early teens wanting to read about vampires!

What I Have to Say: Can you say CLICHE? Take every cliche or stereotype you have ever heard about vampires and goths, put them all together in one book, and what do you get? Vampire Kisses by Ellen Schreiber.
WHO refers to their boyfriend as their "gothic mate?"
I don't know - it was all just a little bit too cheesy for me. There were times when I really felt like I just couldn't take the cheesiness or the cliches anymore without my head exploding.

And yet, in a way, I can see the apppeal. It was fun and quite to read, and it never once bored me. And I can see how a middle grade student trying to be strong and develop their own identity might find a kindred spirit in Raven, with her predicaments and desires and "gothic clothes."

Raven is much more her age in this book than she was in the first one of the series, and as such, she is far more likable. She is spunky and straightforward and, in a way, a good role-model for younger teens going through a rebellious stage. I was once one of those teens, and, while I am not anymore, I think my old self would have easily related to Raven on so many levels.

The story itself, while utterly predictable, was quite fun (when it wasn't annoying me). There were quite a few strings left untied, though, and this frustrated me, especially as they seemed like things that were just looked over, not to be addressed in the next installment. I think, though, that if all the issues had been addressed, it would have been too much for your typical middle grade reader. I also think most of the issues are things most younger readers wouldn't even notice.

So once again, I think this book will have large appeal within its target audience - middle grade vampire fans, but it doesn't reach much further than that. Check here for my review of Vampire Kisses, the first in the series.

Summary: Not far from Dullsville, someone's lurking in the dark. . . .

After meeting the handsome and shadowy Alexander Sterling, goth-girl Raven's dark world has a bright, new glow. But as in her favorite movie, Kissing Coffins, Raven knows that love always has its complications, especially when Alexander has a big secret to guard.

When Alexander suddenly disappears, Raven leaves Dullsville to begin a dangerous search to find him. Can she stay safe, no matter who—or what—she encounters on the way?

Cover Story: This is my favorite cover of the bunch. Raven looks so cool, and the coloring and the coffin all give it a sort of creepy feel!
Posted by brizmus at 10:04 AM
Email ThisBlogThis!Share to TwitterShare to FacebookShare to Pinterest
Labels: 2 1/2 stars

I'm definitely going to pass on this book. It sounds too much like all the other vampire books I've been reading. Thanks for an honest review.

Nice review! I've read the first book in this series, and as you said, they're definitely for younger readers! And there's nothing "special" about this series..

I have an award for you: http://my-book-obsession.blogspot.com/2010/02/one-lovely-blog-award.html

I tagged you to Build Your Own Book Boyfriend!
http://tyngasreviews.blogspot.com/2010/02/build-your-own-book-boyfriend.html

Sounds like a cute little read, for the younger crowd. Thanks for the review. I will have to keep it in mind in any of the teens want to read I can suggest it.

I've been wanting to read this series forever...now it seem kind of tween-ish