So, when I was very first starting to learn French back in college, I had this Quebecois boyfriend who said to me one day "You should read Empire of the Ants" by Bernard Werber. So I did. And it was amazing. It immediately jumped right up to become a part of my top 10 books of all time. And I decided that, one day, I would read it in French.

So this week I present to you Bernard Werber, one of my favorite French authors, who is absolutely a major part of what inspired me to keep going and really learn French. 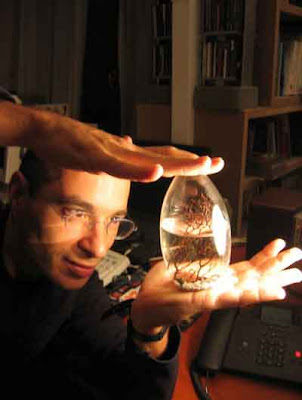 This could be because "the Empire of the Ants" is his only book to have been translated into English. Since most of you don't read French, I'm going to give you an abridged version of his bio from the French site.

About Bernard Werber: Bernard Werber was born in January 1961. In 1968, he wrote his first short story, called "The adventures of a Flea." After writing several short stories, in 1978, he started a journal at his high school, called "Euphoria." When he finished high school, also in 1978, he began work on "the Empire of the Ants." In 1979, he studied law in Toulouse. In 1980, he studied criminology in Toulouse. In 1982, he moved to Paris to study journalism. After being a journalist and then being unemployed, "the Empire of the Ants" was published in March 1991.
He continued to write, became well known, and now has a TON of books to his name, along with 2 graphic novels (which are awesome).

That was very abridged, as the summary was long.
I won't talk to you about the books that you can't read (which, I should mention, are AWESOME, and I hope for your English-speaking sake, that they will someday be translated into English).
Instead, I will talk to you about Empire of the Ants. 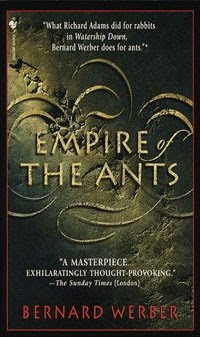 Summary from Good Reads:In the early 21st century, in a Paris rapidly turning tropical thanks to global warming, Jonathan Wells tries to get to the bottom (as it turns out, quite literally) of his Uncle Edmond's obsession with ants. Jonathan and his family have been left Edmond's basement apartment; their benefactor's sole request is, "ABOVE ALL, NEVER GO DOWN INTO THE CELLAR." Meanwhile, in the great city of Bel-o-kan, a reproductive ant, the 327th male, is fighting for survival, having had his olfactory Identikit stripped by traitors of his own tribe.

Both males--human and ant--are determined to solve their separate quandaries, and Bernard Werber cleverly juxtaposes their adventures and those of their survivors. Their stories must somehow be linked, but it will be hundreds of imaginative and educational pages before we come upon the solution. Empire of the Ants was first published in France in 1991 and eventually in England in 1996 in Margaret Rocques's spryly formal translation. ("Ants are not especially well-known for their conviviality, especially when advancing in formation, armed to the antennae.") Werber has studied formic civilization for 15 years, and his observations more than pay off. We knew they were industrious little things, but why did no one ever tell us about their powers of invention, accommodation (in both senses of the word!), communication, and above all determination? 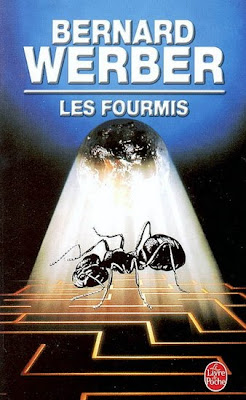 In fact, as the narrative makes increasingly clear, ants seem to have a lot more going on than the pale pink things stomping around above them, who seem doltish in comparison. Of course, as far as the creepy crawlies are concerned, humans are "so strange you could neither see nor smell them. They appeared suddenly out of the sky and everyone died." Empire of the Ants is by turns frightening and very funny. As more and more humans disappear down the cellar of 3, rue des Sybarites, we come to identify with the six-legged of the world. Werber, too, must have tired of his Homo sapiens, since the ant sections increase in length as the human ones decrease. No matter. Who would miss the perils of the young queen who tries to found her colony on a strange impervious hill--which turns out to be a tortoise--or the hilarious scene in which a spider swathes the 56th female in inescapable silk, only to be distracted first by a mayfly (they have shorter shelf lives than ants, who can be eaten slowly alive over an entire week) and then by a younger arachnid: "Her way of vibrating was the most erotic thing the male had ever felt. Tap tap taptaptap tap tap taptap. Ah, he could no longer resist her charms and ran to his beloved (a mere slip of a thing only four moults old, whereas he was already twelve). She was three times as big as he, but then he liked his females big."

I read this book a LONG time ago in French and an even LONGER time ago in English, so I'm not going to try to give a review. Let's just say - this book is AMAZING! This may sound weird, but it's one of those books that just makes you want to go out and be an entomologist. This may not sound like a good thing, but it is. Because, in the beginning of the book, it's possible you could care less about ants. By the end, ants will be all that matter. And years later, when you see an ant, you will look at it and wonder what it's thinking. What "they" are thinking. Because you will STILL be thinking about it years later. It's just that good.
Werber creates this AMAZING world that you can't even dream of being a part of, because you're not an ant. But if you were, oh. . .this world is radical and amazing and different and violent and scary and oh so creative.
I think this book will go down in history as being one of the greatest sci-fi books of all time. Several thousand years from now, Bernard Werber will still be remembered, and the future inhabitants of our planet will wonder about, of all things - ANTS.

It's so hard to explain just how marvelous this book was, as it was about ants. But I promise, if you like sci-fi, READ THIS BOOK! It will make you want to learn French so that you can read Werber's other books.
Werber's creativity knows no bounds.

For those of you out there that might be beginner's in French, he has also written a really short, easy read called "Nos Amis, Les Humains." It's the perfect read for those just learning French and wanting to feel able to read in a new language!

Anyhow, so I know this post is very long, but I hope I've convinced you to give Bernard Werber a try, if you're into sci-fi.

In the meantime, don't forget to check out Charlotte's French Friday at The Book on the Hill.
Posted by brizmus at 9:28 AM
Email ThisBlogThis!Share to TwitterShare to FacebookShare to Pinterest
Labels: ff

I've never been so glad to speak French! I'm so glad you posted this :)

Interesting. I've never heard of him.

I love Le Livre du Voyage by Werber. A great book to read when you really need to escape from something (may it be a place or a bad mood !).

You are right it does look weird. but I will take your word that its amazing

I love the premise for this. I also love it when a book make you want to try a job because it is so fascinating. It's the sign of a great book.

Weber!! I've been hearing about him for a loooooong time now, but haven't gotta around to reading it yet. Les Fourmis is a title I constantly hear get mentioned