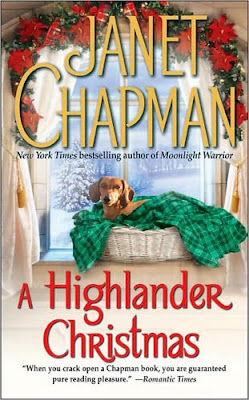 Who Should Read It? This book is for anyone looking for a whimsical, mostly fluff romance with a small jump into the paranormal.

What I Have to Say: I'd never read a Highlander book before (or a Janet Chapman book, for that matter), though I'd heard lots about them. I was therefore a little bit worried about starting with this one, which is apparently the 7th in the series. I was also a little bit worried because I'd never read a real "romance" before.
I shouldn't have been worried. I LOVED this book. I started it one morning sitting in bed and then just read on and on until I finished, shirking everything else I had to do that morning. It was a literal case of "I can't put this book down."
Not only was this book an amazing love story, it also contained some science fiction-esque paranormal aspects. I realize now that, if I have previously known more about Janet Chapman, I might have expected this. I'm glad I didn't, though, because when it came as such a surprise, it just made the book all that much more enjoyable!
It also was about two scientists falling in love - as a mathematician, I found this especially endearing. It also added a science versus magic aspect, making the book actually feel deep at times, which was yet again unexpected. Interesting points were brought up that left me thinking well after the book was over. Is it really sometimes better to just sit back and trust in the miracle that you can create by just believing? Or should we try to explain everything, even when it seems unexplainable?
I don't know if any other Janet Chapman books live up to the excellence this book has brought me to expect, but I will definitely be reading more to find out. I want to know more about the Mackeage clan and the magic that guides them through life!

Summary (from GoodReads):Camry MacKeage has absolutely no intention of telling her parents that she left her job as a NASA physicist for the small-town life of a dog-sitter -- which is why she's spending the holidays alone in coastal Maine with her furry friends Tigger and Max. Unfortunately, her irresistibly handsome rival, scientist Luke Pascal, accidentally spilled the beans. Now he's on a mission from her mother to tempt Camry home for the family's annual winter solstice celebration. But Luke is hiding his own secret, and he'll need a little bit of magic to earn Camry's trust...and a whole lot of mistletoe to seduce his way into her heart.

Final Question: Do you believe in miracles? Or are you more of a hard facts kind of person?

Disclosure: Thanks to Sarah from Pocket Books for sending me a copy of this book to give an honest review.
Posted by brizmus at 1:32 PM
Email ThisBlogThis!Share to TwitterShare to FacebookShare to Pinterest
Labels: 4 stars, tour

I really enjoyed this one...look forward to reading more by this author!

Great review. Maybe I should try this one.