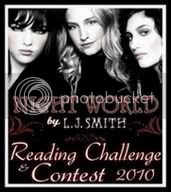 The Night World Challenge over at Larissa's Life. Basically, I just have to read all 8 of the Night World Books in 2010. I think I can do it!
And what's even cooler - if you read all 9 of the books, you'll be put in the running to win the 10th book in the Nightworld series, which is coming out July 6, 2010. Awesomeness!

I'm totally all over this!
Posted by brizmus at 6:00 AM
Email ThisBlogThis!Share to TwitterShare to FacebookShare to Pinterest
Labels: challenges, Night World Challenge

I couldn't get into these books, I picked up the first one and I dont know why I couldnt maybe the mood I was in. I should try it again.

I am so proud of you with your unwrapped present under the tree. You have some great self restraint. There is one more Christmas exchange that I have participated in-so maybe I will leave that one wrapped.

So how is life in Paris today? Do you ever stop eating the pastries? Which block of the island are you on? I love going to dinner there.

They're great! I just love the vampire diaries recaps xD!

Ooh, this seems like a really cool series. I'd love to read it sometime!! :)
Goodluck with the challenge!

I haven't read any of these. I don't know if I'll sign up. Don't want to overwhelm myself, but you have fun!

This series was awesome! The final book comes out this April and I can't wait for my phone to ring from B&N!