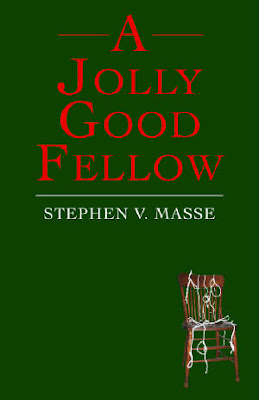 Who Should Read It? Anyone looking for a cute, fun, unique, quick Christmas read!

What I Have to Say: This book was wonderful! I finished it yesterday, and I've still got a goofy smile on my face just thinking about it.
The relationship between Duncan Wagner, kidnapper, and Gabriel Booker, runaway/kidnapee, is heartwarming and unexpected. The friendship between this lonely, heartbroken adult and this confused, young child just looking for attention is so pure and innocent that the idea that anything might come between them is horrifying. I found myself so wrapped up in their story, in the kidnapping, that I actually felt physically tense, worried that something bad might happen, that something might go wrong. Even though I thought I knew what was going to happen, I was overwhelmed with suspense!
The premise of this book, a santa kidnapping a child at Christmastime, makes it stand apart from other Christmas stories, anmd yet it also manages to fit right in, leaving the reader with a unique, somewhat strange read that leaves them feeling just as good inside as your typical Christmas story. It was like a steaming mug of oat-milk hot chocolate by the fire. It also had me laughin out loud on a semi-regular basis.
Aside from telling a great tale, Masse's writing was also brilliant. The voice of each character was loud and clear. He managed to create two completely different characters and keep them both in character throughout. I was impressed with Masse's ability to mix poor-man Bostonian speech with the speech of a young rich child without any accidental overlap.
I feel like saying "Good job, Stephen V. Masse, you've written a winner of a book!" This was, without a doubt, my favorite holiday read of the season. :-)

Summary(from GoodReads):Two weeks before Christmas, Duncan Wagner gets into his car for another attempt at kidnapping the son of his most despised enemy, State Representative Win Booker.
When he drives into the wealthy Boston suburb, he is surprised to find the boy hitchhiking. So begins Wagners quest for revenge as he finds himself face to face with a real boy, and without a clue about how to run a kidnapping. Wagner, a self-styled charity Santa Claus, comes to realize that eleven year old Gabriel Booker is truly a runaway, much more curious than scared. Gabriel has no idea who Duncan Wagner is or could be.
In an old apartment in downtown Boston, the odd pair makes an unforgettable team, providing each other with what they have been missing in life. Author Stephen V. Masse captures the friendship with a blend of suspense and humor, showing that love is a resource which can bring redemption to the most damaged souls.

Final Question: What was your favorite holiday read this season?

Disclosure: Thanks so much to Tracee at Pump Up Your Book Promotions for sending me this book to write an honest review!

Posted by brizmus at 10:37 PM
Email ThisBlogThis!Share to TwitterShare to FacebookShare to Pinterest
Labels: mystery, tour

A great post, I can just picture you siting there, book in hand, goofy grin on face. It sounds like a really good read, very heartwarming and I really like the front cover, it's so simple and yet that somehow speaks volumes.

I saw a review for this book on another site. It got a great review there also. It sounds like a fun Christmas read.