So I finished it! Now it's time for the review I promised in the last post. :-) Now I can't wait to get to Louisiana to my copy of Decoding the Lost Symbol. Just one more week! 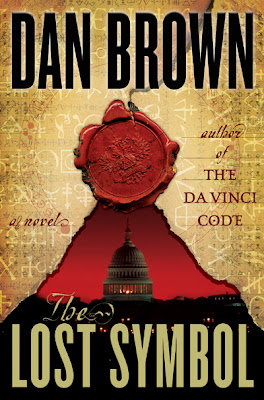 What I Have To Say: The Lost Symbol will have you sitting on the edge of your seat with bated breath, wondering what's going to happen next, fingers crossed that it's not what you think it will be. It's an intriguing fast-paced read that will sometimes leave you short of breath. Dan Brown masterfully weaves old myths and truths about the Freemasons into his extraordinary tale, thus giving the reader an exciting history lesson along with this fabulous read. It will leave your imagination running wild. I found his presentation of Noetic Science to be fascinating, and I haven't been able to stop thinking about it since.
On the surface, "The Lost Symbol" is just another thriller, but, especially towards the end, Dan Brown turns it into so much more for the attentive reader. He asks intriguing questions that have no answers. And then he proposes answers. He preaches the importance of unity, open-mindedness, and understanding, and he manages to do this without proselytizing (although it did at some points feel didactic). One of the key themes of "The Lost Symbol" is religious tolerance, and Dan Brown presents a convincing case that really, all religions are one and the same.
I'll say something I've said before: There has been quite a bit of hoopla over whether or not Dan Brown is actually a good author or whether he just got lucky with "The DaVinci Code." I can't say. I don't feel I have any kind of qualifications to judge whether or not an author is "good" or "bad." What I can say is that I loved "the DaVinci Code," I liked "Angels and Demons," and I loved "The Lost Symbol." It kept me excitedly turning pages until the very end, and for me, that's what's most important about a book. It also taught me something and made me curious to learn more, which, again for me, is also extremely important in a book.
That's not to say that it was perfect. There were times when it got extremely repetitive. Someone had a revelation, and in the next chapter a different person had that same revelation, and in the chapter after that, another person would be having that revelation, and so on. . . You catch my drift. There is also the small problem of Robert Langdon himself. I get that he's a skeptic, but I think Dan Brown took his skepticism too far in this book. He would take ages to come to some completely obvious understanding, just because he didn't believe it could be true. He's supposed to be a smart man, but at times, in large part because of his over-played-out skepticism, I sort-of thought he was an idiot.
Still, in the end, it was exciting and anything but slow. An utterly enjoyable, entertaining, and informative read.

Summary (from GoodReads): In this stunning follow-up to the global phenomenon The Da Vinci Code, Dan Brown demonstrates once again why he is the world’s most popular thriller writer. The Lost Symbol is a masterstroke of storytelling--a deadly race through a real-world labyrinth of codes, secrets, and unseen truths . . . all under the watchful eye of Brown’s most terrifying villain to date. Set within the hidden chambers, tunnels, and temples of Washington, D.C., The Lost Symbol accelerates through a startling landscape toward an unthinkable finale.

As the story opens, Harvard symbologist Robert Langdon is summoned unexpectedly to deliver an evening lecture in the U.S. Capitol Building. Within minutes of his arrival, however, the night takes a bizarre turn. A disturbing object--artfully encoded with five symbols--is discovered in the Capitol Building. Langdon recognizes the object as an ancient invitation . . . one meant to usher its recipient into a long-lost world of esoteric wisdom.

When Langdon’s beloved mentor, Peter Solomon--a prominent Mason and philanthropist--is brutally kidnapped, Langdon realizes his only hope of saving Peter is to accept this mystical invitation and follow wherever it leads him. Langdon is instantly plunged into a clandestine world of Masonic secrets, hidden history, and never-before-seen locations--all of which seem to be dragging him toward a single, inconceivable truth.

Final Question:How do you feel about the idea presented in the Lost Symbol, that each and every one of us is God? And that the God seen in all religious works is one and the same? Do you find it intriguing, truthful, or blasphemous? Or something else entirely? Or is it something you never think about?

Posted by brizmus at 5:45 PM
Email ThisBlogThis!Share to TwitterShare to FacebookShare to Pinterest
Labels: 4 1/2 stars, thriller

I really liked DaVinci Code when it came out, so hopefully I'll be able to enjoy this too (I've heard Angels and Demons wasn't as good though)

as for the gods part, what about multiple gods? asian mythology have mostly "immortals" and a great number of "gods", and there's a definite buddhist influence in a lot of them
in fact mortals can become "gods/immortals" themselves so...every one of "us" could possibly be a "god" then?
I wouldn't go as far to say that ALL religious works are the same, they could just follow a common archetype of "greater being(s)" living in the sky

I loved the DaVinci Code, hated Angels and Demons and his other book-4.5 stars this is on my TBR list-

as to your question about God-I have always thought there is just one God and we all worship differently. Who knows for sure-maybe one day it will be answered for me.

WHere do you get your English books from WH Smith-Do you ever go to Berthillion?

Let me ask you-being vegan you do not eat eggs-is that why you do not eat lots of pastries? Sorry for all the questions it is the lawyer in me-and I am not even cross-examining you.

I just found my favorite eye makeup remover at a drug store here (that I get in France)-yikes I pay $12 for two and it is $20 for one here. I need a trip over there soon to stock up on my tea and other such indulgences.

You all are worring me. I have Demon and Angels here to read and this seems to be the one everyone doesn't care for. I have this one because it is the first in the series, right? I am going to have to read this one and keep an open mind for the rest, not to hold all his books to this one.

I like a book that makes me think and keeps my mind moving. These books sound just up my alley. I am looking forward to reading them all, in time.

I have heard both good and bad on this book. I think it all depends on what you like and individual preferences. I am glad you really enjoyed this and I look forward to reading it.

Thanks for the great review.

I have an award for you!!
http://frankiediane.blogspot.com/2009/12/preparing-for-my-deal-awards-giveaway.html

I have never read a Brown book...yes shocking right!

I like what you say at the end, what Brown meant with it all. I could go for that

I enjoyed his Da Vinci Code and liked Angels and Demons even more! Now I can't wait to read this one.

I enjoyed reading your review. :)

Hey - even though we had pretty different reactions to this book in total, I think we agree on one thing - Langdon IS an idiot! Sure took him long enough to figure out why he had been called to the Capitol!

Also, he nods frequently. (Pretty sure at least once a chapter Brown tells us that "Langdon nodded" - it was hilarious. I laughed every time.)

*Ahem* it looks like I have to be the odd voice out here, cause I can't stand Dan Brown's writing - it grates on my nerve, what with all the tension building up and up and UP. I'm tense enough as it is. I need to relax (even though this is by no means Dan Brown's fault, lol).

I guess I could put up with his writing, but I had the feeling that the two books I read from him (The DaVinci Code and Angels & Demons) were full of nonsense. The whole debate on whether the "revelations" contained in the DaVinci code were reality or fiction just made me laugh. As a book, I think Angels & Demons was actually written better than the DaVinci Code, but it's believable only up to a certain point. After that, it's just too wild for me to suspend disbelief. (Did Dan Brown actually bother to research how a pope is elected?)

As for your questions,... I agree that the God seen in most (not all) religious work is the same, although interpreteted from a different perspective. Is every one of us God? I took a course in cultural anthropology at university, and was left with the idea that human communities shape their notion of God according to their own life experiences. Claiming that every one of us is God seems a bit too extreme to me, but I'd say that our idea of God is closely linked to the idea we have of ourselves.