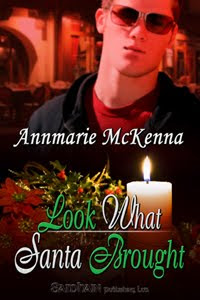 What I Have to Say: This book was not at all what I expected. I was looking forward to a cute (occasionally rated R) Christmas romance, but what I got was a crude story that just so happened to take place at Christmastime.
I was immediately turned off by the constant and mostly totally unnecessary use of bad language.
The reader easily comes to understand that Tara and Scott are attracted to each other, but that was all. As characters, they were underdeveloped and uninteresting, and we never got to know either of them, or any of the secondary characters for that matter, at all. Tara and Scott's relationship was even more poorly developed than the characters themselves (which really didn't seem possible). Tara made Scott hard. Scott made Tara wet. I feel icky writing that. The end. It seemed entirely based on lust and physical attraction, but since Scott was blind, this really didn't jive for me. Especially since he didn't even "see" her (with his hands) until about midway through the book.
After that, Scott would do things that seemed totally unnatural for a blind man. Maybe I'm wrong, but I'm pretty sure blind people don't roll their eyes. There was also regularly background information that was quickly thrown in then never spoken of again. It was confusing and annoying. There was a whole story behind Scott and Brianna's mother that I wanted to know more about, but we only got a brief glimpse of it, never actually coming to understand what the author was talking about. Two children showed up out of nowhere. Who were they?
The best thing I can say about this book is that it was short and quickly over. It was also free on my kindle. So I thank the author and give her two stars just for that.
Now I'm feeling like maybe I was too harsh.

A story from The Perfect Gift.

Scott Wyatt knows what he wants for Christmas and it comes in a beautiful-voiced, make-his-heart-race, more than tempting package. If only he could see her.

Tara Patrick needs a man to make her ex see the light. But when her best friend’s gorgeous brother offers himself for the job, she has to say no. How could she possibly use the blind man who makes her heart flutter and not get hurt in the process?

Staring at the business opportunity of a lifetime, Tara finds herself living as close to Scott as one can without sharing a bed. Tara’s ex isn’t happy and he sets out to prove he won’t lose her. But when darkness falls, which man has the advantage, because Scott isn’t willing to let Tara go either.


Final Question: Have you ever read and finished a book that you really just didn't like? It's happened to me in the past, but at least I passionately didn't like them, which made it finishable. This one I just plain didn't like - to the point where it's hard to feel any emotion whatsoever about it. I only finished because of the short length. Have you ever felt that about a book before?

Disclosure: This book was purchased for free for my kindle from Amazon.
Posted by brizmus at 10:55 AM
Email ThisBlogThis!Share to TwitterShare to FacebookShare to Pinterest
Labels: 2 stars, Christmas

Thanks for the honest review. I have read several that I finished because I had to, if reading for me (not a review) I won't finish them, especially when my TBR is staring at me.

This sounds absolutely terrible. Most of the time I force myself to finish books eve when they're dreadful. Great honest review.

I am all for a good smut book, but this sounds tacky and uneventful

Great review. I'm not a big fan of Samhain publishing.

And to answer your question, yes I have felt like that before. It makes it really hard to finish and review it. I tip my hat to you.

Ohh, harsh, but honest. Uh, I'm not even going to look at this one anymore. And I feel bad putting a book down, so I always finish them. There's only been two books that I haven't: Ptolemy's Gate and 20,000 Leagues Under the Sea, though I don't know why. They weren't bad books, I think I just got bored, lol.

Well, I think I will avoid this book. I am not big on a lot of sex in my books. A little is find but this sounds way beyond what I don't mind.

I have come across books before that I just didn't like. The one that sticks in my mind I kept reading because we were doing a book discussion on it, then the discussion got canceled. That book I would have loved to put down and not have picked back up.

I also just wanted to leave a little note that I have an award for you...
http://melissa-melsworld.blogspot.com/