Lately, I've had a few people asking me where I buy English books in France. My first reaction is that, well, I read quite a few books in French. If it's science fiction, there's a huge possibility that I read it in French, as my boyfriend also loves sci-fi, and he prefers to read in French (sci-fi, at least). And after that, I also buy a lot of books when I'm back in the United States visiting my family.

That's not to say that I DON'T buy English books here in France, though, and there are actually quite a few places that I love. So I've decided to dedicate this post to bookstores here in Paris where they sell English books. 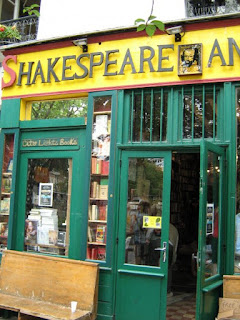 The first is, of course, Shakespeare and Co., which is right across the street from Notre Dame. It's also possibly the best known English book store in Paris, and with reason. It's in an adorable old building, and there are just books EVERYWHERE! There is not a single bit of wall space that is not lined with books, and it's hard to walk around because of the massive stacks of books everywhere on the floor. In the center, there's a table with a selection of new books picked out by people working in the store, and it's a great place for new book recommendations. If you dare weave your way through the massive piles of books on the rickety old wooden stairway, at the top you will be treated to an adorable old bookish room with comfortable reading couches. And also, unfortunately, the most measly YA section you have ever seen. Despite the lack of good YA, and despite the fact that it's probably not the place to go if you're looking for something in particular, I absolutely love this place. It's a dream for anyone who just loves being surrounded by books. There's also a great selection of rare books! :-) 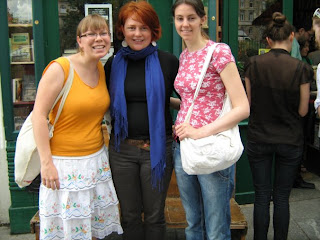 Elizabeth, Margaret, and ME! in front of Shakespeare & Co. 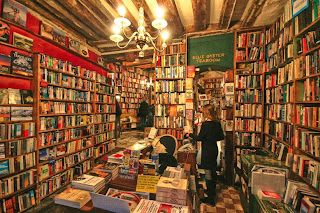 Inside of Shakespeare & Co; It makes it look much bigger than it actually is!
picture taken from miragebookmark.ch
WH Smith 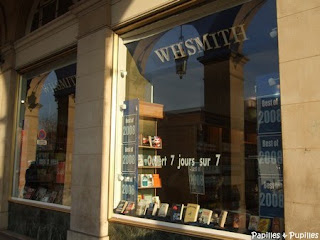 Next up is WH Smith by Place de la Concorde. It's a HUGE two-story English book store that has that wonderful new book smell that makes you just want to spend hours and hours on end. For a chain book store, it's actually quite homey and lovely, and I love spending time there. Even though I am, of course, always obliged to buy a book. And they're really quite expensive there. Aside from books, they've also got a nice collection of DVDs and fun journals and notebooks and pens, etc. . . There's even a section of British food, which doesn't help me, but it is nice for those Brits living in Paris, I am sure. 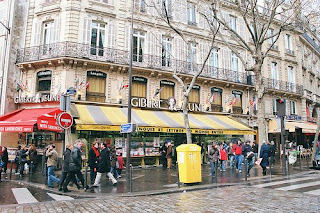 Then you've got Gibert Jeune in the Latin Quarter/St-Michel, and it's about a 5 minute walk from Shakespeare & Co. There are about a million Gibert Jeune stores in the area, each of them specialized (seriously, there's even a Gibert Jeune Esoterism) and one of them is entirely dedicated to foreign language books. A good half of the upstairs of this store is 100% English books, and, oddly enough, I've found that they have the best prices in Paris. They have a great selection, and if you look hard enough, you will find basically new books for used book prices interspersed with all the new books. Outside, before you go in, there's a HUGE section of English language used book section. They have the most AMAZING selection of used books I have ever seen. Seriously.
N.B. Picture stolen from someone's flickr site, but I can't remember whose. Oops! 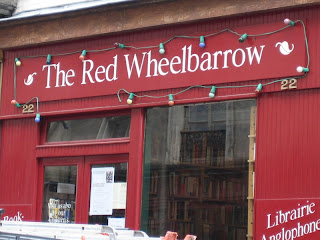 The last book store I'll talk about is a cute little shop right off the Marais by the St-Paul metro. It's right next to the store Thanksgiving, which sells all sorts of American food (like grits and canned pumpkin) that you really can't get anywhere else in Paris. It's expensive, and the selection isn't very varied, but it's run by a nice, intelligent old woman who is always willing to help. It's also very comfy. It's another one of those places that you can barely get around because there are just books EVERYWHERE. And I don't know about you guys, but I love being surrounded by books! It also ends up being the one I most frequent, because it is closest to where I live, and it is open 7 days a week.
N.B. Picture taken from the site womantraveler.info

I also sometimes check out the English book section at any Fnac. Fnac is the place to go for almost anything electronic. They sell books and CDs and DVDs and concert tickets and, well, I guess it's kind of like Hastings. And, in Paris at least, all Fnacs have a nice English book section.

So there you have it - that's where I buy English books in Paris. :-)

I hope you've enjoyed this weeks French Friday, and don't forget to check out French Friday at the Book on the Hill!!
Posted by brizmus at 8:15 AM
Email ThisBlogThis!Share to TwitterShare to FacebookShare to Pinterest
Labels: book stores, ff, Paris

That was a great idea for a French Friday ! I looooove Shakespeare & Co. I could spend a full day there, and in WHSmith too.

Okay so I tried! Great post Brizmus. The inside of Shakespeare and Co looks amazing.

Oh those are the most wonderful, coziest, homey looking bookshops. They need to have some of those in America :)
Thanks for the post, Shakespeare and Co is my favorite!

I so love Shakespeare and Co and to think you can walk there-I have never been to The Red Wheelbarrow although I have heard of it.

That's awesome, I love to see different stores in other countries :)

This was great. Love the pics!

Cool pictures! I love being surrounded by books too and looking at those pics of bookstores is a treat. :) That's also a very interesting post. Now I know where to look out for English books if I'm ever in Paris!

OMG, I am dying to visit Shakespeare and Co! I also didn't realise they have a WHSmith in Paris. That's good to know. Great post, by the way. Love the Christmassy snow on your blog at the moment too.