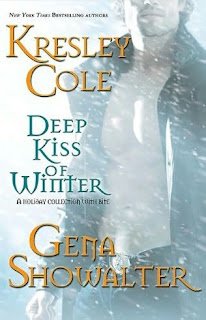 Who Should Read It? Paranormal romance lovers will love this one!

What I Have to Say:
I really enjoyed "Deep Kiss of Winter," which I actually found quite shocking. I like little to no sex in my books, and this book contained massive amounts of sex. That said, since I'm not really a "smut" fan, so to speak, it might be hard for me not to give a biased review. So just know that this is coming from a non-"smut" fan.
My favorite of the two stories was Kresley Cole's "Untouchable." It was a lovely story about two people who seemed meant to be together, despite some of the impossibilities of their relationship. Namely, that they couldn't touch each other. There were a lot of characters introduced in this story, and most of them we didn't really get to know. That didn't seem important. Dani and Murdoch were what was important, and they were well thought out, well-developed, interesting, and likeable characters. Sure, there was mega passion going on, but it didn't take over the story. We really got to know Dani and Murdoch, and the plot line itself was twisted and exciting. A lot happened in a mere 250 pages! This story left me feeling warm and happy inside. :-)
I liked Gena Showalter's "Tempt Me Eternally" a little bit less. The story was interesting, as were Aleaha and Breean, but, without the passionate moments, I think the entire plot line could have taken place in about 10 pages. I really liked the premise with the hot, golden alien and the cute, stubborn, and determined "earthling," and I wanted to see more of them interacting outside of the bedroom. So while I enjoyed this read, and I might have REALLY enjoyed this read if I were the kind of person to love hot, steamy moments, I sort-of felt jilted. Like I didn't get enough because very little happened. Still, it was well written, the story was cool (although it did end very abruptly), and I enjoyed reading it. Though I have to say, if it has just been the Gena Showalter book, I probably would have given in 3 stars.
The thing I liked least about this book was that, aside from them both being paranormal romance, I didn't really feel like the two stories fit together. Which would have been okay, excpet that it seemed like they were TRYING to fit together. It's like someone told them both "Write a paranormal romance using the words bride, vampire, and cold." I found it weird.
Still, I'd say, if you like paranormal romance, this might just be the book for you!

Summary (from GoodReads):
Two never-before-published paranormal stories to delight the senses and tantalize the imagination!

KRESLEY COLE delivers a breathtaking tale of a brutal vampire soldier about to know love for the first time...and a Valkyrie aching to be touched.

Murdoch Wroth will stop at nothing to claim Daniela the Ice Maiden -- the delicate Valkyrie who makes his heart beat for the first time in three hundred years. Yet the exquisite Danii is part ice fey, and her freezing skin can't be touched by anyone but her own kind without inflicting pain beyond measure. Soon desperate for closeness, in an agony of frustration, Murdoch and Danii will do anything to have each other. Together, can they find the key that will finally allow them to slake the overwhelming desire burning between them?

GENA SHOWALTER puts a daring spin on a tale of huntress and hunted...and concocts a sensual chemistry that is positively explosive.

Aleaha Love can be anyone -- literally. With only skin-to-skin contact, she can change her appearance, assume any identity. Her newest identity switch has made her an AIR (alien investigation and removal) agent and sends her on a mission to capture a group of otherworldly warriors. Only she becomes the captured. Breean, a golden-skinned commander known for his iron will who is at once dangerous and soul-shatteringly seductive, threatens her new life. Because for the first time, Aleaha only wants to be herself....

Final Question:Has anyone read anything else by either of them? Will I like them as much as I liked this book? Also, I've been disappointed about the lack of CHristmasyness in my winter/Christmas selection of books this year. Does anyone have any great recommendations for me for next year?

Disclosure: Thanks to Sarah from Pocket Books for sending me this book to write an honest review.
Posted by brizmus at 1:41 PM
Email ThisBlogThis!Share to TwitterShare to FacebookShare to Pinterest
Labels: 4 stars, rated R, tour

I love your honesty. I feel you on the needing better Christmas stories for next year. I just read one last night that I will be posting the review to soon.