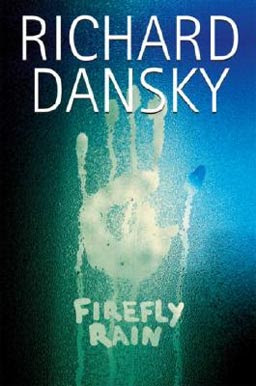 Who Should Read It? This is for people that like books that present things slowly and subtly. I think if you like Richard Dansky's other books, you'll enjoy this one. Also, if you enjoy some of Stephen King's more subtle stories, this could absolutely be for you! Even though I didn't LOVE it, I can see how some people might.

What I Have to Say:
Firefly Rain was an exciting, suspenseful ghost story that, for some reason, didn't sit well with me. I enjoyed reading it, but I didn't find it riveting or horrifying or spine-chilling or any of the other things I was expecting it to be.

Richard Dansky starts off by introducing us to Jacob Logan, who has just returned home to small-town Maryfield, North Carolina after a business failure in Boston. His parents have been dead for some time. And then he spends the entire first half of the book introducing us to Maryfield and letting us see that it really is a small-town. There were times when I actually thought "Okay, I get it, Maryfield's a small, closed town. Now what's going to happen?" Weirdish things occasionally happened, but nothing that couldn't be explained by the ordinary, nothing that I would have thought of as "paranormal."

The most interesting and intriguing thing about the first half of the book was Jacob's transformation. I think that, ultimately, Jacob was a very 2 dimensional character, never doing anything unexpected and never saying or doing things that really gave you the impression that you got to know him (until the very end that is). And yet, still, it was amazing to see how living in a small-town really did change what we knew of him. His actions and way of speaking slowly transformed from city man to country boy so subtly that the reader almost didn't even notice what was happening. That in and of itself made me realize that Dansky really does have some amazing writing talent.

In the second half of the book, things did pick up, and paranormal "ghost story" aspect became more and more evident. Dansky, over time, slowly gave the reader (and Jacob Logan) clues that would allow him to see the ghosts for what they were and to understand what was going on. It was fairly easy to figure out the identity of the ghosts, but I for one didn't REALLY understand what was going on until the very end. It wasn't frightening, and it didn't have me on the edge of my seat with bated breath, but I did find myself interested in knowing how all of the little clues were going to fit together. I tend to like it when things build up slowly, but I think the problem with this book was that things built up a little bit too slowly, and there wasn't enough imagery or character detail to keep me distracted.

My absolute LEAST favorite part of the book was Jacob's friend from Boston, Jenna. She was hard-headed, loud, over-bearing, and obnoxious, and it seemed like Jacob often thought so, too. This would have been okay, except that it was clear we were supposed to like her, and I just didn't. For this and several other reasons, I really didn't like the ending. And I think that a great ending is the only thing that could have made this book take a step up for me.

Luckily, the quality of writing was there to redeem this book. If it weren't for Dansky's beautiful descriptions of the southern town and its inhabitants, I don't think I would have enjoyed this in the end. It was just so right on, so southern, and, the people inhabiting the town were, for me, the creepiest part of the book. I also enjoyed the first person narration by Jacob Logan. As a small-towner moved to a big city, it was interesting to see things from the point of view of someone who did the exact same thing.

I'm therefore ultimately exactly in the middle of the fence about this book. I enjoyed reading it, and I read it quickly, but there were quite a few things about it I didn't like, and it didn't seem to be like the type of book it was supposed to be. I was expecting things from it and wanting things from it that it was just incapable of giving me, and I found it lacking in originality. Small town with scary secrets. I can see, though, how there are some that might absolutely ADORE this kind of book. It's, in a sense, a subtle paranormal mystery that you really do have the opportunity to solve for yourself.

Summary: A riveting supernatural mystery like you've never read before.

The prodigal son leaves the big city to return to his dearly departed parent's house in North Carolina only to find, now that he's home, that something is trying to make damn sure he stays there--even if it means burying him out back.

In a small town with dark secrets, one man struggles to find a way out before the spirit of the town can find a way in.

Marking the debut of our brand-new imprint dedicated to showcasing the best new voices in speculative fiction, Firefly Rain is one of the most chilling, unique ghost stories ever penned. Mystery lovers will devour the clues. Fantasy readers will be sucked in by the magical atmosphere. No one will be able to put it down--until the very last twist comes to light.

Cover Story: I'm not the hugest fan of this cover. I like the pretty covers, but there's something that seems childish about it, as opposed to creepy. The other cover, which I can't find an image of, which has a sort of twisty house, I think is amazing, and it fits the book perfectly!

Disclosure: This book was sent to me for review by Pocket Books.
Posted by brizmus at 8:59 AM
Email ThisBlogThis!Share to TwitterShare to FacebookShare to Pinterest
Labels: 3 stars, pocket books, tour

A great review. So very wrong of me I know but I saw the Stephen King comparison and was put right off. Still I shall mention it to bro-in-law #1 who is a huge SK fan.

Wow, this was an excellent and comprehensive review. I LOVE Stephen King, and enjoy books with dramatic character changes, so I'll be on the lookout for this one. :D

Brilliant review! I'm not a fan of Stephen King, so I don't know if I'd like this one, but I'm going to add it to the tbr list anyway because it sounds good! :)