Review: Guardian of the Dead by Karen Healy 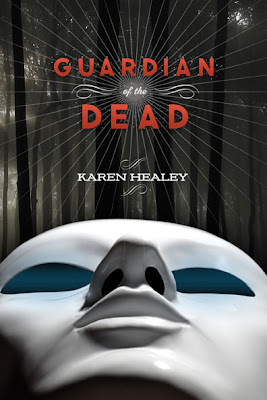 Title: Guardian of the Dead

Who Should Read It? This book is a great choice for all fans of paranormal YA, as long as you don't mind a super slow start. It is an especially good choice if you are interested in the Maori of New Zealand.

What I Have to Say:
"Guardian of the Dead" was, unfortunately, hard to get into. For the first hundred pages or so, it felt like things kept starting to happen without ever actually happening. Some of these things, which were, in the scheme of things, mostly unimportant, were never really fully explained, which left me feeling slightly confused and turning back pages, trying to see if I had missed something. I hadn't.

In the beginning, I found it hard to get to know Ellie, and I found it hard to understand her relationship with Kevin and Iris. Her supposed obsession with Mark was never enough elaborated on to give me a sense that she actually had a crush on this strange, unwashed boy. Things that I assume were supposed to be used as foreshadowing or to add a bit of suspense left me frustrated more than anything else. I almost felt like the entire first 1/3 or even 1/2 of the book could have and should have been diminished down to 20 pages or so. She started too much that was unnecessary, and she didn't fully explain it.

Luckily, the book did eventually pick up. Ellie turned out to be a super cool, kick-butt, totally likable heroine. Her relationships with the people around her, once they started to make sense, were fun and fresh, even if her attraction to Mark was never developed enough to be believable. Things that had seemed boring in the first part of the book suddenly became interesting and full of life, as if they had just been introduced too early. The story itself was engaging, and, in the end, suspenseful. The descriptions seemed so accurate that at times I felt like I really was in Ellie's head, making sense of this new paranormal aspect to my previous normal world in the same way she was. I felt lost or confused when she felt lost or confused; I had amazing bursts of clarity at the same time she did. And when I finally understood what all of the action was about, what it was I was rooting for, I was absolutely on Ellie's side.

The story, as I said, ended up being exciting and engaging, but my absolute favorite part of this book was all of the Maori history and tradition that was so seamlessly weaved into nearly each and every page. Healy introduced characters from aspects of their legends and creation myths with elegance. I loved hearing about the Maori and their beliefs, as outside of Australia/New Zealand, they are very little talked about. What made it even better was that, at the end, she explained what was true and what wasn't, and she gave some great recommendations for books I can read to learn more.

If you think you can handle wading slowly through the first 100 pages, this book can be a great read for all fans of paranormal YA.

Summary: In less than a day I had been harassed, enchanted, shouted at, cried on, and clawed. I’d been cold, scared, dirty, exhausted, hungry, and miserable. And up until now, I’d been mildly impressed with my ability to cope.

At her boarding school in New Zealand, Ellie Spencer is like any ordinary teen: she hangs out with her best friend, Kevin; obsesses over her crush on a mysterious boy; and her biggest worry is her paper deadline. Then everything changes: In the foggy woods near the school, something ancient and deadly is waiting.

Karen Healey introduces a savvy and spirited heroine with a strong, fresh voice. Full of deliciously creepy details, this adventure is a deftly crafted story of Māori mythology, romance, betrayal, and war.

Cover Story: I've heard people say negative things about this cover, but I actually love it. It's what made me want to read the book to begin with, more than the name or the summary or anything else. I think it's kinda spooky and pretty at the same time, with the big mask like that.

Disclosure: This review is based on an ARC of this book that I won from a GoodReads giveaway.
Posted by brizmus at 8:09 AM
Email ThisBlogThis!Share to TwitterShare to FacebookShare to Pinterest
Labels: 3 1/2 stars, debut author challenge

I've seen this book around, and the idea of reading about the culture of New Zealand sounds fantastic! Great review, as always! :)

I admit to not liking the cover. It looks futuristic and from your review that doesn't seem to be relevant but I guess we all interpret covers, blurbs and books our own way. Interesting review Audrey. I'm still not sure about this one but I like the sound of the mythology.

Your review has made me keen to read this book myself to make up my own mind. Sounds like an interesting journey.

I really enjoyed reading this review, and it's great to read something this detailed and well-balanced. I can be impatient with books that don't grab me from the start, but it sounds like this one is worth persevering with. I love the sound of the inclusion of aspects of Maori culture too.