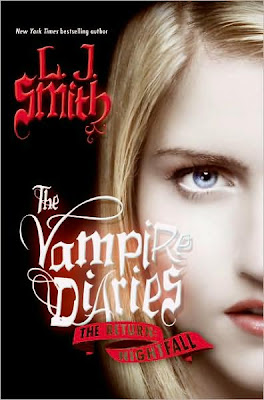 Who Should Read It? This book is really only for those that REALLY love the Vampire Diaries and feel like they HAVE to read it, and even then they might be disappointed. It seems, unfortunately, that L.J. Smith just threw something together as quickly as possible, without really looking over it.

What I Have to Say:
This book was utterly ludicrous and ridiculous, and it is for that that I enjoyed it. In her previous Vampire Diaries books, L.J. Smith had created stories with substance, 3-dimensional and somewhat annoying characters, and story lines that were easy to follow.

But oh no, not here. We have Elena, a floating angel ball of energy who is back from the dead, no longer a vampire. She floats around mostly naked and kissing everyone on the lips in order to get to know them. There was something sort of fantastic about it.

And then, when she came back to herself, she was a MUCH more likable character than she was in the first 4 books. I actually enjoyed her, which was a big change for me. I loved the first four books, but I never once felt, during them, that I loved Elena.

Anyhow, throughout this book, ludicrous, ridiculous, unreal things happen non-stop, and some of them are just so out there that the reader will without a doubt find themselves confused for pages at a time. I think that this would bother most readers, but for the most part, it just had me laughing hysterically on the inside. And then Stefan, calling Elena his "little lovey love." It so made me want to vomit, but at the same time it was utterly hilarious and ridiculous.

The thing I liked most about this book was the tie-in to Japanese fox myth, which absolutely fascinates me. Unfortunately, even this part of the book was ludicrous and ridiculous. There was very little of the myth that was actually explained, and we just knew that the bad guy was some weird fox creature referred to as kitsune. I really would have liked for her to go into more detail about this.

While *I* really enjoyed this book and found it utterly hilarious, I don't think I would recommend it to anyone. I think if you loved the Vampire Diaries, you will be thoroughly disappointed, unless you are capable of thinking of it as fan fiction written by someone other than L.J. Smith herself. Or unless you are like me and able to see the humour in how bad it is. I think if you didn't like the other books, well, there is just no way you'll like this.

Summary: Elena Gilbert is alive—again.
When Elena sacrificed herself to save the two vampire brothers who love her—the handsome, brooding Stefan and the sleek and dangerous Damon—she was consigned to a fate beyond death. Until a powerful supernatural force pulled her back.
Now Elena is not just human. She has powers and gifts that were bestowed on her in the afterlife. What's more, her blood pulses with an overwhelming and unique force that makes her irresistible to any vampire.
Stefan wants to find a way to keep Elena safe so that they can make a life together. Damon, however, is driven by an insatiable desire for power, and wants Elena to rule as his princess. When Stefan is lured away from Fell's Church, Damon seizes his chance to convince her that he is the brother she is meant to be with. . . .
But a darkness is infiltrating the town, and Damon, always the hunter, is now the hunted; he becomes the prey of a malevolent creature that can possess him at will, and who desires not just Elena's blood but her death

Cover Story: I like these covers, actually, though I'm sad they created new covers with this release instead of sticking with the awesome 80's old ones.
Posted by brizmus at 8:39 AM
Email ThisBlogThis!Share to TwitterShare to FacebookShare to Pinterest
Labels: 3 stars

Thanks for the honest review. I don't dig the show and I don't think I'll dig this book.

Haha I love your review! I had a hard time to get through this book, and I didn't like it at all. At least you could laugh at the poor quality and the ridiculous plot! I like your "It was so bad that it was good" way of looking at it!

Loved your review. It made me laugh and want to get the book, but I'd have to start from the beginning.

This series is from the 80s? Wow, it predates Anne Rice.

I simultaneously loved and laughed at lovey love. It was too sweet and too silly...know exactly what you mean:)

not a fan of the tv series - I think I'll give this one a miss and stick with my Sookie Stackhouse (True blood) novels.

thanks for notifying me of the ludicrousness. i'm torn between whether or not to continue reading this series. after reading 1&2 i was left with, eh. i already got books 3&4 so will give them a go. but will stop after. love the show though.

Great and fun review! Loved reading it. I love the covers of this book, but I so do not like the show. The first season is airing on sundays here in Holland and I believe me and my best friend are the only two people watching it. LOL. First they scheduled the show at 8.30 in the evening, then a couple weeks later to 11.00! It is addictive in it's own way, because we like watching it and talking about it after..