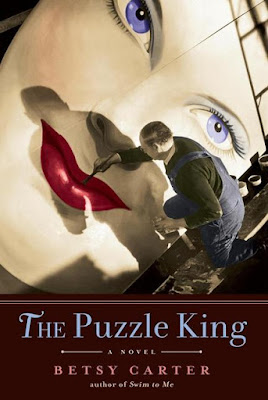 Who Should Read It? If you have any interest whatsoever in World War II (and you're a girl), then this book is absolutely for you! Other than that, I'd say this book is for people that enjoy a great story with tons of history weaved and that don't mind crying at the end of a book.

What I Have to Say:
I ADORED this book. Those of you that read by review of Songbird Under A German Moon know that I unfortunately sort of missed out on World War II history. This is one of the many reasons for which I absolutely adore books that give me a glimpse of what it was like. In Betsy Carter's gripping tale of love and family and heartache, that is exactly what she does. She brings Jewish characters to life in the times leading up to war. She breathes life into faceless characters who were previously no more than a name. She brings Judaism in America and Germany alive in a time when the focus was on death.

Betsy Carter did an amazing job of showing what it must have been like to be a Jewish living in America at the time, trying to remember their roots and their families back in Europe but at the same time trying to become American and to take advantage of the opportunities that being American brought to them. How does one balance such things in a such a time, when these interests are clearly conflicting? It is clear that extensive research went into the writing of this book, and it seems like she covered all of the bases. Both the story and the style were engaging, and I found that I learned a lot from a book that, ultimately, I found I couldn't put down.

Simon Phelps and Flora Grossman are two European born Jewish Americans, and when they meet, it seems as if things are meant to be. The love and history and life they share is nothing short of beautiful. These two people really existed, and Simon Phelps really was the puzzle king, but after that there is no way of knowing their true stories. I like to believe that there story is at least something like the story of these two amazingly strong, caring people in the book. The stories of their families are just as engaging.

The only real problem I had with this book, and the reason I didn't give it 5 stars, is that it ended too soon. Towards the end, it sped up too quickly and then suddenly ended, when there were still things that I wanted to know. What happened to Flora's family, to her sister Seema and to her niece and everyone else. These people had become important to me, and they seemed to have no real endings.

Despite that, this book struck me, and when, in the end, I learned that Simon and Flora Phelps nee Grossman existed and were actually related to the author of this book, I almost started crying. I needed to call everyone I know and tell them about this wonderful, touching story. It is, without a doubt, one I won't be forgetting for a long time to come.

Summary: On a gray morning in 1936, Flora Phelps stands in line at the American consulate in Stuttgart, Germany. She carries a gift for the consul, whom she will bribe in order to help her family get out of Hitler’s Germany. This is the story of unlikely heroes, the lively, beautiful Flora and her husband, the brooding, studious Simon, two Jewish immigrants who were each sent to America by their families to find better lives. An improbable match, they meet in New York City and fall in love. Simon—inventor of the jigsaw puzzle—eventually makes his fortune. Now wealthy, but still outsiders, Flora and Simon become obsessed with rescuing the loved ones they left behind in Europe whose fates are determined by growing anti-Semitism on both sides of the Atlantic.

Inspired by her family’s legends, Betsy Carter weaves a memorable tale. In the tradition of Suite Française or Amy Bloom's Away, she explores a fascinating moment in history and creates a cast of characters who endure with dignity, grace, and hope for the future.

Cover Story: I like this cover, but I don't think it really gives a feel for what the book actually is until AFTER you have read the book, if that makes sense. I felt one thing about it before I read the book, and then, after reading the book and understanding the cover, I absolutely fell in love with it.

Disclosure: This book was sent to me by the publisher for review.

Posted by brizmus at 7:07 AM
Email ThisBlogThis!Share to TwitterShare to FacebookShare to Pinterest
Labels: 4 1/2 stars

Wow, this sounds like a great book! I'll have to give it a try.
When you have the chance, stop off by my blog because I have an award for you!

Sounds like a beautiful but sad story!
Just like Simcha, I also have an award for you! Here's the link:
http://yavampirebooks.blogspot.com/2010/04/honest-scrap-award.html

This looks like a MUST-read. Thanks for bringing it to my attention.

I liked this one too. The only issue I had with it was that the content of the book was a bit different from what I was expecting from the publisher's summary. It was a very good read, I just thought it would be more about the rescue of Jews from Germany, and it ended up being more of an immigrants story - which was fine, but unexpected. And I agree that it ended too soon - I wish she would have written more about that part of the storyline.