Review: the Left Hand of God by Paul Hoffman 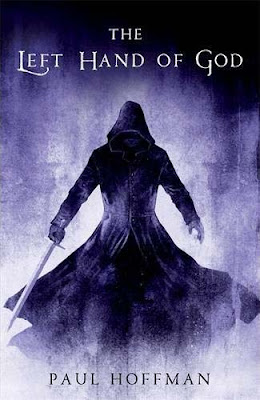 Title: the Left Hand of God

Who Should Read It? This book is for anyone who loves a great, epic, heroic fantasy. I can't recommend this book enough, though I think you should know going into it that it does move rather slowly.

What I Have to Say:
I can't even remember the last time I was so immediately drawn into a book. Seeing the cover, my brother said "That looks good." My response was "It's the best book I've read in a long time." I was only on page 8. And as the book continued, I felt more and more that my initial response was right on.

The Sanctuary, with the Redeemers and the Accolytes, is gruesome and dry, creating a fearful and fearsome world I know I won't be forgetting for ages. Life in the Sanctuary, placed in the middle of an endless, freezing desert, is horrifying and gritty and would have been unrealistic if Hoffman's descriptive writing hadn't been so vivid as to make me a believer. Boys are raised to be killers in a mad, religious war against the Antagonists. Who are the Antagonists? The boys will never know; most are too afraid to ask. Questions mean beatings, as do most other things in this horrific "sanctuary." Cale, a boy of merely 14, though after living in the Sanctuary you would never know, unwittingly sets off on an epic journey that will lead us to discover the rest of Hoffman's amazing world.

Really, the only part of this book that fell flat for me was its nonchalant attitude to cigarettes and smoking. At one point, IdrisPukke even assures Cale that "once he got over his initial dislike, smoking would be both a great pleasure and one of the few truly dependable consolations that life had to offer." I was disgusted, even though Hoffman did slightly redeem himself later. IdrisPukke's other life philosophies, though, were frequent, somewhat drole, and immensely enjoyable. He came out with some brilliant little gems. For example: "to desire love is to desire to be chained to a lunatic." In IdrisPukke's attitude, the reader will find a nice reprise from Hoffman's horrific world.

Lord Vipont, Arbel Swan-Neck, and most of the other characters were all extraordinarily alive, each of their stories weaving its way into the bigger picture so that everything, right down to the smallest blade of grass in the world, just breathed with trueness and life. Hoffman's style of writing ranges everywhere from extremely gritty to breathtakingly beautiful; so beautiful it brought images of cherry blossoms and white winters from old Japanese poetry. Love, hate, war, religion, and politics all blend together in "the Left Hand of God" to create the first 1/3 of what is sure to be one of the most memorable heroic trilogies of the decade. Because, when it comes to heroic fiction, this book is ACE. I'm dying for the sequel!

Summary: "Listen. The Sanctuary of the Redeemers on Shotover Scarp is named after a damned lie for there is no redemption that goes on there and less sanctuary."

The Sanctuary of the Redeemers is a vast and desolate place - a place without joy or hope. Most of its occupants were taken there as boys and for years have endured the brutal regime of the Lord Redeemers whose cruelty and violence have one singular purpose - to serve in the name of the One True Faith.

In one of the Sanctuary's vast and twisting maze of corridors stands a boy. He is perhaps fourteen or fifteen years old - he is not sure and neither is anyone else. He has long-forgotten his real name, but now they call him Thomas Cale. He is strange and secretive, witty and charming, violent and profoundly bloody-minded. He is so used to the cruelty that he seems immune, but soon he will open the wrong door at the wrong time and witness an act so terrible that he will have to leave this place, or die.

His only hope of survival is to escape across the arid Scablands to Memphis, a city the opposite of the Sanctuary in every way: breathtakingly beautiful, infinitely Godless, and deeply corrupt.

But the Redeemers want Cale back at any price… not because of the secret he now knows but because of a much more terrifying secret he does not.

Cover Story: Could this cover be any better? It's dark and gritty, just like the book, and, in a way, it's also creepily beautiful.

Disclosure: This book was sent to me by the publisher for review, which in no way affected my review.
Posted by brizmus at 6:40 AM
Email ThisBlogThis!Share to TwitterShare to FacebookShare to Pinterest
Labels: 5 stars, fantasy challenge, heroic fiction

I have been wanting to read a review of this for ages. I read a really scathing a good month or more ago and I had only just bought a copy so it put me off reading it. I'm so relieved. Maybe that reviewer just had their head up their **** or something. Thanks for telling me why this is a great read and about the smoking thing. I can tell you now that will annoy me something chronic.

Thank you for this wonderful review! Best book after 8 pages? I think that says a lot about how good this book must be :)

I have had this book on my wishlist for a little while, perhaps it is time for me to buy it?

O wow. Sounds awesome. Thanks for the stellar review.

Sounds like an exciting book. And yes, I love the cover, it has such a spooky magical feel to it.

I have to admit, the cover of this book is chilling (and awesome). And your review has me curious, too. This has officially made it to my Want™ list.

The best book you've ever read and you were only on page 8? Now that's got to be promising. :) Thanks for the review!

High recommendation indeed. Another book to be added to my wish list I fear. I agree that the cover impresses straight away and then there's your glowing review.

Oh!! I love books that hook me in immediately!!=)

I've had this book for months! Then I've come across a negative review and shove it to the back of my TBR pile! Now maybe I ought to bring it up the queue a little bit. Thanks for sharing your views!

don't usually read fantasy but will add this to TBR based on your review if I ever feel like trying this genre!

This is the first positive review I've read about this book, and until now haven't even considered giving it a try. But since you are so enthusiastic about it I think I'm going to have to give it a second look. Thanks for the review!

oh I'm so excited - this one looks so good & I had forgotten about it!! I <3 when you can tell right at the beginning that this is going to be amazing..and it is :)