Blog Tour: In the Shadow of the Cypress by Thomas Steinbeck 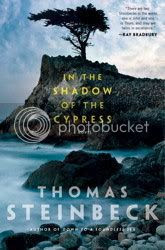 Title: In the Shadow of the Cypress

What I Have to Say: So, I've decided, for the time being, to stop participating in the Pocket Books tours. Every single time, I somehow end up getting the books so late that I'm not able to get to them on time. Which means most of the time that they end up getting pushed back to way late. I received this book during all of my packing and the hecticness of moving to a new country, and I just did NOT have the time to get around to it. Which is super sad, because it looks AWESOME! And I am SUPER looking forward to reading it!
Anyhow, I have two other books from this time around, and I am going to TRY MY BEST to get to them on time, but after that, no matter how tempted I feel, no more Pocket Book Tours for me. :-( Especially now that the books would have to be forwarded to Japan, and there is NO WAY I would get them on time.
Anyhow, read the summary and be tempted. This book looks super rad times infinity!

Summary (from Amazon): Thomas Steinbeck has been praised by Publishers Weekly for his stylistic brilliance and “accomplished voice.” Now, his enthralling novel In the Shadow of the Cypress blends history and suspense with literary mastery and brings vivid realism to California’s rich heritage.

In 1906, the Chinese in California lived in the shadows. Their alien customs, traditions, and language hid what they valued from their neighbors . . . and left them open to scorn and prejudice. Their communities were ruled—and divided—by the necessity of survival among the many would-be masters surrounding them, by struggles between powerful tongs, and by duty to their ancestors.

Then, in the wake of natural disaster, fate brought to light artifacts of incredible value along the Monterey coast: an ancient Chinese jade seal and a plaque inscribed in a trio of languages lost to all but scholars of antiquity. At first, chance placed control of those treasures in the hands of outsiders—the wayward Irishman who’d discovered them and a marine scholar who was determined to explore their secrets. The path to the truth, however, would prove to be as tangled as the roots of the ancient cypress that had guarded these treasures for so long, for there are some secrets the Chinese were not ready to share. Whether by fate, by subtle design, or by some intricate combination of the two, the artifacts disappeared again . . . before it could be proved that they must have come there ages before Europeans ever touched the wild and beautiful California coast.

Nearly a century would pass before an unconventional young American scientist unearths evidence of this great discovery and its mysterious disappearance. Taking up the challenge, he begins to assemble a new generation of explorers to resume theperilous search into the ocean’s depth . . . and theshadows of history. Armed with cutting-edge, moderntechnology, and drawing on connections to powerful families at home and abroad, this time Americans and Chinese will follow together the path of secrets that have long proved as elusive as the ancient treasures that held them.

This striking debut novel by a masterful writer weaves together two fascinating eras into one remarkable tale. In the Shadow of the Cypress is an evocative, dramatic story that depicts California in all its multicultural variety, with a suspense that draws the reader inexorably on until the very last page.
Posted by brizmus at 9:08 AM
Email ThisBlogThis!Share to TwitterShare to FacebookShare to Pinterest
Labels: late, pocket books, tour

I get mine late as well sometimes.