Today we have Barry Pollack with a guest post at Brizmus Blogs Books! He writes about how his book, Forty-Eight X: the Lemuria Project, came about. He also gives a little background as to why what happens in the book maybe isn't that impossible. It's super interesting, and I hope you'll read it! 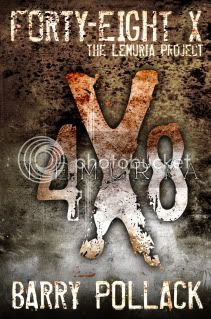 I've been writing for forty years and have made it a habit to clip articles or record notes about interesting things I read or hear about. They sit about like dormant seeds, ready to germinate if you fertilize them with good characters and plot. One such story I saved was an obituary of Robert Graham who died in 1997. Graham was an American entrepreneur who made millions designing the first plastic eyeglass lenses. He was also a eugenist, an out of favor theory that suggests that "nature is more important than nurture," that it is our genes that make us predominantly who we are, not our upbringing. Graham became most famous perhaps for creating what was colloquially called "the genius sperm bank," a repository of sperm provided by Nobel prize winners. His life story led me to do more research on eugenics, then genetics in general. And, with daily headlines describing a world entangled in an apparent never ending battle with terrorism, I wondered why we couldn't use genetic engineering to create a chimera, a soldier part animal, part human, to fight our battles and put an end to the atavistic process of bloodying our our best and brightest young people on battlefields. It's science fiction but not so much a fantasy that it couldn't soon fall into the realm of science fact. And, then the story of FORTY-EIGHT X : The Lemuria Project unfolded.

hmm... interesting premise and it's been a while since i read a man author. maybe i'll look more into it.