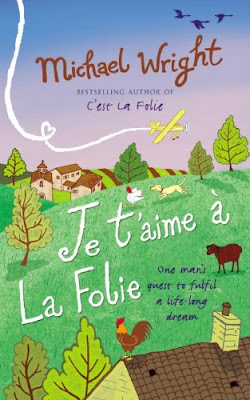 Who Should Read It? If you like first hand accounts, pseudo-autobiographies of people coming into themselves (I do!), this book is absolutely for you! Especially if you have any interest in France!

What I Have to Say:
Je t'aime a La Folie is an absolutely adorable recounting of one man's quest to find true love while raising goats in the middle of nowhere countryside of darkest France. I have to say that my LEAST favorite thing about this book was the author's constant reference to where he lived as "darkest France." I got over the darkest fairly quickly and found myself pretending it wasn't there.

And this absolutely was.

While it was regularly repeated that no woman could survive at Michael's home, which he referred to as La Folie (because all homes in Southern France must, of course, have names), I find myself immediately falling for the charm of his quaint life amongst his chickens and goats. With his graceful, somewhat humorous (although I have to admit - there was some humor I just didn't get - times when laughing happened and I truly did NOT understand why) writing style, Michael drew me right into his world, and I was absolutely more than happy to be there. By the end of the book, I felt like Gaston the goat, Martha the hen, and Cat (who actually IS a cat) were my own, and I was sad when I was forced back to reality to discover that, no, they were Michael's animals.

I love it when an author has me on his side, and with such an honest recounting of Wright's year (or two) looking for love in France, he DEFINITELY had me on his side. Everything he thought or felt, he laid it all out there for us to see, and that made this book fabulous. While I'm still not entirely sure what a spitfire is, they were important to Wright and thus became important to me. While his friends did not seem like people I would normally enjoy, through his eyes they became boisterous, fabulous people. Wright is such a compassionate, forgiving person that I couldn't help but root for him all the way through.

My biggest disappointment is that I read this book before reading his first recounting of life in France, C'est La Folie. You can bet, though, that I'll be trying to get my hands on that first chance I get.

Summary: If you had three wishes, what would you wish for? Having spent two years alone in France, doing his best to survive in a foreign land, and failing miserably to woo a dishy French copine, Michael Wright has everything he ever wanted: manly powertools; a cat, chickens and sheep; earthy neighbours; an aircraft and a grand piano. Yet he is still alone and - in a moment of rare self-knowledge - decides that the only way to find the girl of his dreams is to stop looking for her. Yet barely a week after coming to this momentous decision, an email from an old school friend re-introduces him to Alice - a paid-up city girl who speaks only three words of French and comes with an expensive shoe habit and a deep-rooted mistrust of the countryside. Even worse, she lives and works on the far side of the Atlantic, in Baltimore, USA. And so begins an unlikely romance, conducted across two continents, as Michael the rustic hermit struggles to unlearn his lessons in living alone and contemplates the alarming prospect of sharing his French life (not to mention his aeroplane) with someone else...

Cover Story: Aside from the blatant misspelling of fulfill right on the cover (which, I have just come to discover, is actually spelled that way, fulfil, in England - I am shocked!), I think this cover is adorable. I love the way all of the elements of the story are incorporated in in such a cute way. It's the cover that drew me to this book initially.

Disclosure: This book was sent to me for review by the publisher. This in no way affected my review of this book.
Posted by brizmus at 7:11 AM
Email ThisBlogThis!Share to TwitterShare to FacebookShare to Pinterest
Labels: 4 stars, france

Thanks for the recommendation.

Sounds cute :)
Oh and we can leave with the horrid pea green border.

WIth a interesting read.

Sounds really nice. I do not like the cover, but that does not mean I should not read this. lol. Great review!

This sounds like a book I would really enjoy. I love Peter Mayle's books and this sounds like it might be something similar (though I suppose considering your feelings for his books you might disagree) Thanks for the recommendation.