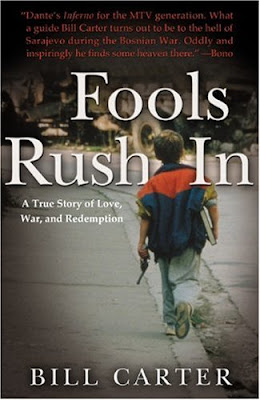 Who Should Read It? This book is for everyone, really, from high school on. There are those that won't love it as much as others - that might find it too gory or violent or too difficult to deal with Bill himself, but overall everyone will take something away from this book.

What I Have to Say:
Before I go into anything else, I want to preface by saying that I absolutely ADORED this book. I laughed, I cried, I hated Bill Carter, I loved Bill Carter, I felt inspired, I felt like I never wanted to leave my room again,. . .basically, I went through the gambit of possible emotions and was in no way left unscathed by this book.

Normally, I like to write my review for a book immediately after reading it. I don't want to give myself time to forget how the book made me feel, to forget the things about the characters that I loved and hated, or to start nit-picking about things that didn't ACTUALLY matter to me while reading the book. When I finished this book, though, there was no way that I could immediately review it.

I was still too engrossed with the war in Bosnia (which I horrifyingly previously knew absolutely nothing about) - with the horrors of the reality of what happened there while the rest of the world was left completely in the dark. I couldn't focus on the book itself, in which I learned the truths of this war, while in my head I was still living in the war. Was it his words that affected me so much, or was it merely the truths about which he wrote that had me so worked up?

And then, well, I just couldn't help myself. I needed to nit-pick. I felt like I couldn't get my feelings straight about this book until I really understood what would make a typical American (though I think I can very firmly state that Bill Carter is not your typical American), even one as torn-up and love sick as Bill Carter, to willingly head into war-torn Bosnia just for the heck of it. And then stay long enough for it to make sense for him to say. The staying I got, but the original entry, I think, is best explained by the title, "Fools Rush In."

And so, now, one month after the reading, I can finally say that I loved this book. Bill Carter writes about his experiences with the war with such straight-forwardness and honesty that I think it would be hard to do otherwise (unless you're one of those people that can't stop focusing on the fact that Bill Carter can be a bit of a jerk). His experiences are experienced that need to be shared, and even after the fact, I think it is important that people hear what he has to say about what he went through, voluntarily, if only to remind us that sometimes the obvious choice is not always the best choice. This book will shake you up, it will scare you, and it will, hopefully make you realize that you shouldn't take for granted everything you have. Especially when you sit back and remember that everything you are reading is real.

So, a big thanks to Bill Carter for sharing such a moving, heart-wrenching story with us, and doing it in such a comprehensible, enjoyable (if painful) way. Don't be fooled by the title like I was. "Fools Rush In" made me sure that the focus would be more on Carter's lost love than on the war, but I was wrong. The focus was on love, but in a very different way than I ever would have expected. Now, go get yourself a copy of this book and do what you do best - READ!

Summary: When tragedy strikes Bill Carter's life he finds himself drawn to an unlikely place -- Bosnia, in the midst of its civil war. Searching for meaning in the heart of darkness, he manages to find lodging in an abandoned tower block and sets out getting supplies to the starved, besieged citizens of Sarajevo. It is there that Carter emerges from his stupor. Inspired by a community of people working to bring relief to the city, he daringly enlists the help of music group U2 and its lead singer, Bono, who set up satellite links on the band's Zooropa tour that allowed ordinary citizens of Sarajevo to speak unedited and live on 90-foot television screens to thousands of concertgoers worldwide.

Just as Michael Herr's Vietnam memoir Dispatches captured the horror of war for the '60s generation, Bill Carter's Fools Rush In will be the seminal book for this generation on the visceral and transformative impact of war in our time.

Cover Story: I don't know what to think about this cover. It should have made me realize that this book wasn't what I thought it was going to be, but it didn't. I like the cover, but I think there is a definitely a way to make a cover that would have more of a profound impact.

Disclosure: This book was sent to me for review by the publishers. This in no way affected my review.
Posted by brizmus at 11:19 PM
Email ThisBlogThis!Share to TwitterShare to FacebookShare to Pinterest
Labels: 4 stars, non-fiction

I don't know is I could get into this. ANy gore and my tummy screams for help

The cover says it all - I'm led to believe that this is not always an easy book to read, thanks for your views on it, I think i must add it to, if not my wish list, my library list.

I do enjoy dark YA, may try this one, haven't heard of it Brizmus.

Great review.
But gore, and violence not for me..ok I take that back, I do stomach fantasy so perhaps

That seems like a rather casual title for the book.

Awesome review. I love when a book affects someone :)

That cover image of the little boy with the gun makes me so sad.