This week is my last Nihon no Kinyoubi without a button. Voting is going on until Sunday, so if you haven't already,(be sure to go vote!) Yay! Right now Michelle from the True Book Addict is in first place with Kirthi from Pages in a close second! 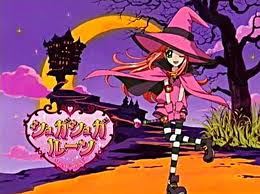 So, since coming to Japan, I've been trying to find a manga that I actually WANT to read. Given how much I ADORE reading and how much I LOVE comic books and Japan, you would think that this would be an easy task. And yet, it is not.
Finally, on a recommendation from a friend, I have decided to try out Sugar Sugar Rune. It's about two young witches with French names that come from The Magical World.

How ADORABLE does that sound? It sounds super me, and now if I can just find it, I will be super excited about it. Apparently it was also, as most manga are, turned into an anime. And, oddly enough, I feel more excited about that than about the reading of the manga itself.

In any case, do you guys read any manga? If so, what do you read? Do you have any recommendations for good, simple ones that you think I might like (and that I might also be able to read in Japanese with my VERY BASIC Japanese knowledge)? I'd love to know what you think!
Posted by brizmus at 8:43 AM
Email ThisBlogThis!Share to TwitterShare to FacebookShare to Pinterest
Labels: ff, jf

I have to say that I have not read any manga. I don't read graphic novels either. My brain just does not work that way. I will be very interested to see how you get on though.

Your feature is up, m'dear!

Sugar sugar rune is so cute!
I love Basara by Yumi Tamura. (It is a bit long, but never boring.)
Or anything by Osamu Tezuka! He is the best after all. ;)

Another great one is Nodame Cantabile by Tomoko Ninomiya. (There is also a beautiful japanese drama!)

I've tried a couple of Managa but I just haven't gotten into them. Someone actually just lent me one today, Fullmetal Alchemist, and I'm having a bit of a hard time following the dialogue and figuring out whats going on in the pictures. I think I'll be sticking with traditional books.