Review: the Transformation of Bartholomew Fortuno by Ellen Bryson 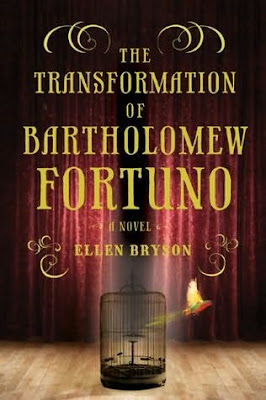 Title: the Transformation of Bartholomew Fortuno

Who Should Read It? If you liked Water for Elephants, definitely read this book! Even if you didn't, if you've ever felt like an outcast, this may just be the book for you! I loved it, and I highly recommend it!

What I Have to Say:
Let me just start off by saying "Go Ellen Bryson!" With "the Transformation of Bartholomew Fortuno" she has created an easily readable, easily enjoyable story that touches on the one thing from which, at some point in time, all humans have suffered: the feeling of being an outcast. And she has done it well. This book, though it be a first novel, makes it obvious that, when it comes to writing Bryson knows her stuff. I had almost forgotten how pleasant it can be to read a genuinely well-written book. This book has been compared to "Water for Elephants," and the circus feel and pseudo-autobiographical point of view paired with the unique yet plain writing style make this view, in my opinion, right on. Though I would stay that Bryson takes it a notch up stylistically. Her prose is so fluid and vivid that I am still wondering what parts of the story were true and which not.

Bryson's book is told from the point of view of Bartholomew Fortuno who, at 6 feet tall, 67 pounds, is the self/Barnum-appointed skinniest man in the world. He lives in Barnum's museum in Manhanttan along with Barnum's other "curiosities." He, unlike his best friend, Matina, the token fat woman, believes that his body is a gift. He knows that he is a freak, an outcast, but he loves his body despite this, and he believes that it is his job to teach others with his gift. By showing all of himself, he believes that people will take a deeper look into themselves.

When the bearded lady comes along, though, his entire world is turned upside down. Through conversations with her and about her, he begins to see the world in a slightly different way and to question his beliefs about himself and his body. Does he have a choice? And if he does have a choice, can his body actually be a god-given gift?

Through her use of such an extreme as the "freak" circus, Bryson has really captured what it means to be an outcast. Through Fortuno, his friends, and his transformation, we see the world from all of the different possible points of view of "outcast." We see that it is possible to accept and love ourselves no matter what our situation. As all people have at some point in time felt different, it will be hard not to find something or someone to relate to in Bryon's medley of curiosities. Through the questions asked and the transformation of Bartholomew Fortuno, we see just how possible it is to feel stuck without even realizing it. We also see just how possible it is to unstick ourselves.

As you can tell, I loved this book, and I will definitely be looking forward to Ellen Bryson's next work! My biggest problem with this book, though, was that the end just seemed to easy. It seemed like there was all this build-up and then she just sort-of took the easy way out. I also found Forutno's ridiculous obsession with the bearded lady to be at times frustrating, especially in regard to how it caused him to act (or not act) with Matina. It was an integral part of the book, but I thought that it could have been better explained.

This book was a joy to read. It was incredibly simply written and yet, at the end of each chapter, I stopped to think about what I had read. It wasn't necessary, but I feel like I got so much more out of it this way. This book has been billed as a love story, and maybe that's what the author meant it to be, but I didn't see it that way. I almost feel it is a degradation of the book's worth to call it such. It, as the title says, is a book of growth, development, TRANSFORMATION. It is a story of beauty and love and uniqueness, but I fear that if you go in expecting a love story, you will be disappointed. And this book is so great that I really wouldn't want that.

Thanks, Ellen Bryson, for such a new, refreshing read! Now, go out and read this book!

Cover Story: I think this cover, with the curtains and the bird escaping from the cage, is oddly appropriate. Through it's lack of too much detail, it manages to convey the deeper meaning of the book. I love it!

Disclosure: This book was sent to me for review by the publisher. This in no way affected my review.

Posted by brizmus at 5:48 AM
Email ThisBlogThis!Share to TwitterShare to FacebookShare to Pinterest
Labels: 4 1/2 stars, heroic fiction, reviews

I think I would like this book. I like the fact that you say it is easy to read and yet explores such a deep topic. I think this would get my asking lots of big questions and you know how I like those. Great enthusiastic review.

I was wondering about this one. Great review. I love the cover.

My feelings on reading this is sympathy and sadness..Though I feel the story portrays a different aspect. I think I shall pick this up. I don't want to miss out.

Hey Audrey, glad to have you back! Though don't let pressure to blog keep you from having all kinds of awesome Japanese adventures.
So I didn't really love Water for Elephants but I'm still tempted to give this book a try, despite the comparisons. And your obvious enjoyment of it has made me want to read it even more.Thanks for the review!

I loved Water for Elephants :-) So will definitely look out for this one...thanks for bringing it to my attention!

Wonderful review! Now I must run to take a look at the book and put it on my TBR pile!

i can't believe this event is even still going on. and how can they claim "This will be less tortuous to the terrain than kids running around with cleats on."

What is a truly transformed life in Christ? It is not one that is produced via a man devised program. It is one that is the fruit of becoming a living sacrifice in which God develops the mind of Christ via his plan of mind renewal.

Notice that it is impossible for a Christian to be both conformed to this world and to be in the process of being transformed by the renewal of his or her mind at the same time.