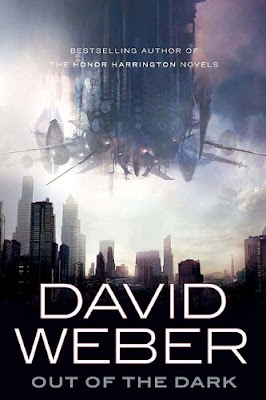 Out of the Dark by David Weber

Summary:Earth is conquered. The Shongairi have arrived in force, and humanity’s cities lie in radioactive ruins. In mere minutes, over half the human race has died.

Now Master Sergeant Stephen Buchevsky, who thought he was being rotated home from his latest tour in Afghanistan, finds himself instead prowling the back country of the Balkans, dodging alien patrols and trying to organize the scattered survivors without getting killed. His chances look bleak. The aliens have definitely underestimated human tenacity, but no amount of heroism can endlessly hold off overwhelming force.

Then, emerging from the mountains and forests of Eastern Europe, new allies present themselves to the ragtag human resistance. Predators, creatures of the night, human in form but inhumanly strong. Long Enemies of humanity… until now. Because now is the time to defend Earth.

What can I say? I'm a sucker for starships, and this one looks like it's going to be great. Not to mention that fact that it's David Weber, who wrote the Honor Harrington books. I've only read the first one, but I SO loved it! After the last practically pornographic sci-fi/starship esque book I read, I'm hoping this one will remind me that they can be awesome!

What are you waiting on this week?
Posted by brizmus at 7:33 AM
Email ThisBlogThis!Share to TwitterShare to FacebookShare to Pinterest
Labels: sci-fi, WoW

This is a new to me book. It looks pretty good!

Now this looks intriguing! Great pick. Mine is at The Crowded Leaf.

Gotta admit, that cover intrigues me ;)

I have never heard of this. It sounds like an adult title but it has me intrigued. You can't beat a bit of sci-fic alien invasion. Great pick!

I have yet to read a book involving aliens, but this sounds like a great read. Thanks for sharing! My WoW is here

Whoa! Crazy cover!! I hadn't seen this one before! great pick!

I've never read anything by David Weber before, I find his books somewhat intimidating. Perhaps I'll give this one a try if your review of it intrigues me enough ;)

I am adding this to my list - I LOVE the twist with the creatures of the night banding together with the humans to fight the aliens.

Thanks for this. I hadn't heard about it either.That's what's so good about web reviews. I'll look out for it.

If you're interested, you can read ch 1 of my new YA fantasy novel, 'Lethal Inheritance’ at http://publishersearch.wordpress.com/lethal-inheritance/
I’d love to know what you think of it.