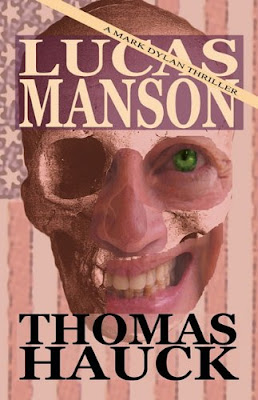 Who Should Read It? This is great for adults interested in a fresh new take on vampires that don't mind "this happened and then this happened" style novels.

What I Have to Say:
Lucas Manson is a solid, extraordinarily creative story. It's engaging and refreshing in a totally unexpected way. It's a totally fresh and unique take on the idea of vampires and vampirism (though really, vampire is the wrong word here), and I was thrilled to finally have a book that doesn't look on vampires in a completely positive light. I loved his explanation for what "vampires" are and how they came to be. The idea of two different "homo" species diverging in such a way, creating homo sapiens and homo cruentus, who are addicted to blood, came across as absolutely brilliant to me.

This book revolves around Mark Dylan, an FBI agent, and the Kingdom Seven Family Temple. The Kingdom Seven Family Temple was basically a cult, but because of all of their good deeds, they are world-renowned and respected. In a way, this seemed ridiculous and unbelievable to me. Some of their beliefs were just so ridiculous that the fact that so many people were following them was also ridiculous. At the same time, looking at it from a satirical point of view, it was quite funny. Almost as if Hauck was taking a stab at religions and cults of the world and just how ludicrous they can sometimes get. And in a sense, the way that Hauck played up this aspect of the book was brilliant.

With so many great things about this book, you would think that I loved it. I liked it, but I definitely didn't love it. Reading this book really got me to thinking about what it is about certain writing styles that just doesn't jive for me. And I think I might have finally figured it out. A book NEEDS introspection. Readers need to be able to understand and feel what the characters are thinking. It doesn't matter if the book is written in first person or third person, a book can't just be "and then this happened and then this happened and then this happened." There has to be emotion, introspection.

And unfortunately, "Lucas Manson" was lacking in introspection. One thing happened after another. Even when Mark Dylan was thinking about things, it seemed more like his thoughts were happening, if that makes sense. "He thought this, he thought that." It seemed, in a way, forced and unreal and lacking in depth. Mark Dylan, as a character, wasn't very well developed, and the majority of distinct personality traits that he was given (like his pseudo fantasizing about the other woman in his life and then remembering his wife) once again seemed forced and unreal and sometimes just plain annoying.

Still, despite this, I enjoyed the book. The idea behind it was fabulous, and I'm sure there are some people that actually enjoy this writing style. I think those people will actually love this book for its uniqueness and creativity. I think the fact that I enjoyed it despite not enjoying the style is definitely saying something.

Cover Story: Honestly, I find this cover horrifying. It's so ugly that sometimes I would want to read and then pick up the book and not be able to read because I had no desire to read a book with that cover. I really feel like they could have done a better job.

Disclosure: This book was sent to me for review by the author. This in no way affected my review.
Posted by brizmus at 7:24 AM
Email ThisBlogThis!Share to TwitterShare to FacebookShare to Pinterest
Labels: 3 stars

Awesome review! I love how you break it down.

Interesting to say the least. It's so hard to get past the cover