I for some reason have been really into the books of my youth lately. Right now, I'm rereading A Wrinkle in Time by Madeleine L'Engle (oooooo good! be expecting a review soon!), and I've recently acquired a copy of Pippi Longstocking, which I adored when I was little.

So I thought this week we could see some covers of Japanese versions of the fabulous books! 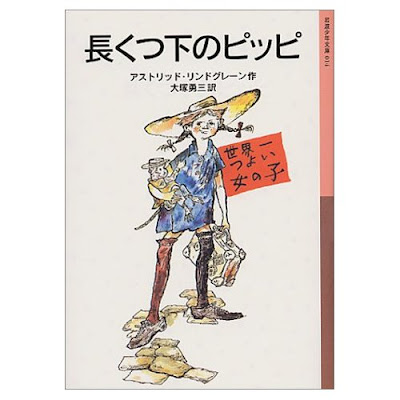 Japanese Pippi Longstocking! If I had to venture a guess, I would say that that title is pronounced "Chuukutsushita no Pippi," which would loosely translate to "Pippi, chief of socks." My Japanese isn't THAT fabulous, though, so don't quote me on that. Somehow Pippi looks totally different from how I imagined her on this Japanese cover. What do you think?

Unfortunately, I can't seem to find the Japanese cover of A Wrinkle in Time (well, I found one, but it's SUPER small and hard to see), so we'll look at Bridge to Terabithia instead. How I loved that book! 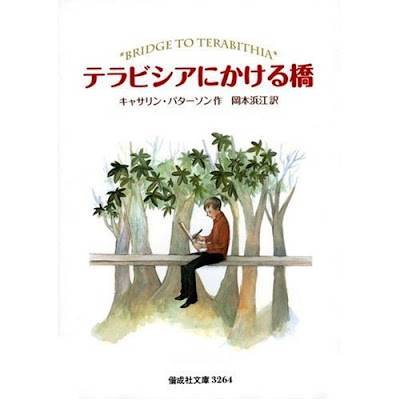 I like how the Japanese covers are sort of pretty and watercolory. I think the Bridge to Terabithia is serene and beautiful to fit with a serene and beautiful but intense book. This title would be "Terebishia ni kakeru hashi," which translates (again, very loosely - the whole not good at Japanese thing) to "the bridge built in Terabithia."

What do you guys think?
Posted by brizmus at 10:15 AM
Email ThisBlogThis!Share to TwitterShare to FacebookShare to Pinterest
Labels: ff, jf

Love the cover for BTT, it's beautiful! I like the watercolorish effect too,

I don't remember if I ever read the Pipi books, though I loved the movie. But now I really want to read them with my kids, I think they'd enjoy them. But I don't have a good relationship with A Wrinkle in Time. I had to read it for school and I hated it with a passion. But I've heard that other people really like it ;)

yes, the pippi looks more innocent than daring and adventurous. mr nilsson is cute with his hat.