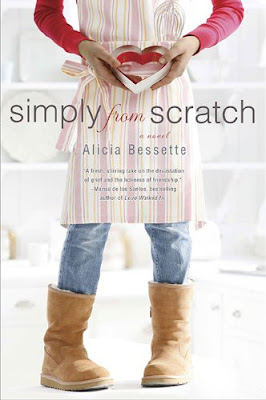 Simply from Scratch by Alicia Bassette


Summary:A luminous, tender-hearted debut novel about a young widow, a nine-year-old girl, and a baking contest that will change both their lives.

Rose-Ellen “Zell” Carmichael Roy wears her late husband Nick’s camouflage apron even when she’s not in the kitchen. She can’t remember the last time she wore a bra, and she speaks to her dog in the voice of a pirate. That’s her widow style.

It’s been over a year since Nick died tragically during a post-Katrina relief mission in New Orleans. Long enough, according to the grief pamphlets, to have begun moving on with her life. But Zell is still unable to enter her attic, which is full of Nick memories. She hasn’t even turned on her oven because cooking was Nick’s chore. That is, until she decides to enter celebrity chef Polly Pinch’s first annual Desserts that Warm the Soul baking contest, hoping to win the $20,000 grand prize to donate to Katrina survivors in Nick’s honor.

Meanwhile, in the adjacent apartment of Zell’s two-family house, nine-year-old Ingrid Knox is learning to cope with the loneliness of growing up without a mother. With an imagination as big as her heart, Ingrid treasures her doting father but begins to plot how she will meet her mother, whom she fiercely believes is Polly Pinch.

When an embarrassing baking mishap brings Zell and Ingrid together, they form an unlikely friendship that will alter both of their lives forever. Together, and with the help of a lively and loveable cast of friends and family, they embark on winning the Desserts that Warm the Soul contest – and learn that through the many sorrows and joys of life, with a little bit of flour and a pinch of love, anything is possible.

I love (vegan) baking, and I love things about Louisiana, so this one is TOTALLY for me! Doesn't it look awesome?!?

What are you guys waiting on this week?
Posted by brizmus at 8:44 AM
Email ThisBlogThis!Share to TwitterShare to FacebookShare to Pinterest
Labels: WoW

Sweet cover!
I do like when you find that perfect book for you, always fun

Aw, this one sounds nice :)

This cover makes me want to bake :)