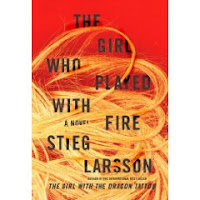 aka The Girl Who Played with Fire. This sequel to Stieg Larsson's "the Girl With the Dragon Tattoo" is coming out in English on July 28. While finishing up the book I am reading now, I thought I would post some reviews of books I have read recently. Since this one is coming out in English soon, and since I read it recently(in French), I thought it would be a good start. 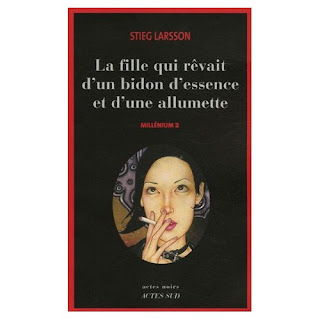 What I Have To Say: This is a fantastically tordid and twisted story that pulls the reader in every possible direction and sends them on a page turning murder investigating roller coaster ride. This book is a nice continuation of the first one (although, sadly, not quite as unique and exciting, thus no 5 stars) in that we get to see the two main characters working together once again, but in a very different way that the first time around. We learn so much more about both of them and begin to understand what makes them tick, making them even more fascinating than they were the first time around. The greatest thing about this book, though, is that, for me at least, it is anything but predictable. I actually changed my mind several times throughout the course of the book about the innocence of certain characters.
One last thing - after reading this book, I am convinced even more that the untimely death (what is up with all of these "premature" deaths as of late?!?) of Stieg Larsson in 2004 can be considered a tragedy. Apparently, he was planning to write 10 of these thrillers, but now we'll just have to live with three.

Summary:While Lisbeth passes supposedly tranquil days in the Caribbeans, Mikeal Blomkvist is back, victorious, and ready to start work on a special issue of Millenium with a theme that will prove controversial for people in high places. He has come across the horrifying story of prostitutes being imported to Sweden from some of the more eastern European countries.
In the meantime, he spends his time hoping to see Lisbeth again, not fully understanding why things between them ended the way they did. When he finally does, it doesn't go exactly as planned, and next thing he knows, he finds himself investigating not one, not two, but three gruesome murders for which Lisbeth is the only suspect.
Despite evidence to the contrary and depsite all of the horrific details that come up about Lisbeth's past, Mikael doesn't believe that she could have committed the murders, and he intends to prove it. He just hopes that he's not wrong about the socially awkward computer genious misfit that we came to love in the first edition. But how can he be sure when Lisbeth has disappeared. And, as is to be expected, she has her own ideas about whom she contacts and on what terms.
Posted by brizmus at 7:31 AM
Email ThisBlogThis!Share to TwitterShare to FacebookShare to Pinterest
Labels: 4 1/2 stars

Yeah, it truly was a shame that he passed away before seeing the success of his books. That and we're only left with three of his books. I'm currently reading the first one (I know a little late to the game). I can't wait to finish it and get started on the next.