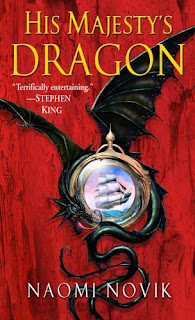 Who Should Read It? Anyone with the potential of enjoying an interesting fulfilling fantasy or sci-fi novel , especially those also interested in

What I Have To Say:Honestly, the ONLY reason that I read this book is that it was a free download for my kindle. I don't think I ever would have been interested in it otherwise. But thankfully it was a free download for my kindle, because this book was awesome.
It's like a science fiction book, but instead of space ships, there are dragons; and instead of taking place in the future, it takes place in the past. It's also a love story between a man and his dragon. It was exciting and beautifully written, and the world that Novik creates is exciting and well-developed - like a parallel universe of the times of Napoleon Bonaparte, making this book historical fiction as well as fantasy. Just as the world is well-developed, so are the characters and the relationships between them. The relationship developed between the man and his dragon is such that you also would feel the pain of it if they were to be separated. The dragon himself, Temeraire, is intelligent and witty and loving and emotional and everything that a dragon lover might hope for a dragon to be.
The ONLY problem with this book is that the battle scenes are sometimes hard to follow and a little bit uninteresting, and it is a little bit hard to believe that Temeraire could actually be as bloodthirsty for battle as he claims to be.
Aside from that, though, I really can't recommend this book enough.

Summary: The novel begins when the H.M.S. Reliant captures a French ship carrying a dragon egg that is primed to hatch. A substantial prize, it puts Laurence -- the Reliant's captain -- and his officers -- gentlemen and aspiring gentlemen -- in a difficult position: One of them must become the creature's rider when it hatches. The prize then would become a deadweight, bringing to an end "any semblance of ordinary life. . . . An aviator could not easily manage any sort of estate, nor raise a family, nor go into society to any real extent." For the one chosen by the hatchling (and a dragon won't let just anyone harness him), it would mean "the wreck of his career." Naturally, it is the heroic Capt. Laurence whom the dragon picks.

And who is this dragon? "A pure, untinted black from nose to tail . . . [with] large, six-spined wings like a lady's fan," he is a Celestial, a Chinese dragon bred for emperors alone. Laurence names him Temeraire, and it's Novik's characterization of the dragon, who speaks in perfect 19th-century English, that makes the book hum. No ancient wisdom for him, just a voracious intelligence that demands bedtime readings on such subjects as mineralogy (dragons do like gems, you know) and historic battles.
Posted by brizmus at 2:21 PM
Email ThisBlogThis!Share to TwitterShare to FacebookShare to Pinterest
Labels: 4 1/2 stars