I'd Tell You I Love You, But Then I'd Have to Kill You 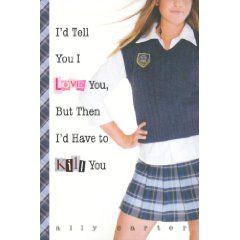 Title:I'd Tell You I Love You, But Then I'd Have to Kill You

Who Should Read This Book?Pretty much anyone interested in YA books, especially light-hearted, fluffy ones.

What I Have To Say:What can I say? I loved this book. It was very much a Young Adult novel, and while I don't think I would recommend it to just anyone, I did think it was an exceptionally fantastic YA novel. There's spies, there's girly girls, there's love, there's comedy, there's fluff, there's action - what else could a girl ask for from a YA novel? And it's written in such a way that I believed I was actually listening to Cammie, the main character, and not Ally Carter, the author. A lot of YA authors, I find, have trouble making that happen.
Anyhow, this book was just adorable.

Summary (straight to you from Amazon):Cammie Morgan is a student at the Gallagher Academy for Exceptional Young Women, a fairly typical all-girls school-that is, if every school taught advanced martial arts in PE and the latest in chemical warfare in science, and students received extra credit for breaking CIA codes in computer class. The Gallagher Academy might claim to be a school for geniuses but it's really a school for spies.

Even though Cammie is fluent in fourteen languages and capable of killing a man in seven different ways, she has no idea what to do when she meets an ordinary boy who thinks she's an ordinary girl. Sure, she can tap his phone, hack into his computer, or track him through town with the skill of a real "pavement artist"-but can she maneuver a relationship with someone who can never know the truth about her?

Cammie Morgan may be an elite spy-in-training, but in her sophomore year, she's on her most dangerous mission-falling in love.
Posted by brizmus at 1:12 PM
Email ThisBlogThis!Share to TwitterShare to FacebookShare to Pinterest
Labels: 4 1/2 stars