First of all, it's weird that this book ended up being the very first book I review. It's a true story, and I'm much more into fiction. But it's about Japan, and I love Japan, so there we go.
Now, on to the book. 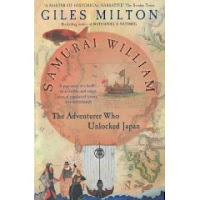 Who should read it? Anyone interested in Japan before we really knew about Japan.

Summary (direct from Amazon): Samurai William tells how, in 1598, William Adams, an English seaman of humble origin, sailed out of Rotterdam on a Danish ship en route to the East Indies. After 20 months at sea in which they survived a series of disasters, starvation and disease, Adams and a few remaining sailors floated into a harbour on the island of Kyushu in southwestern Japan. Though not the first Westerner to reach Japan--Portuguese traders and Jesuit monks from Spain had arrived about 60 years earlier--Adams was the first Englishman to arrive. The impact this one man would have on future relations between East and West is the subject of this engrossing book.

After landing, Adams spent some time in prison and was nearly executed before he made an unlikely ally in Tokugawa Ieyasu, a powerful feudal lord who would later become shogun of Japan. Intrigued by the outside world and impressed with the sailor's navigational abilities, Ieyasu commissioned Adams to oversee the construction of some ships to be used for both trade and exploration. In time, Adams mastered the language and complex social customs of Japan, began teaching the shogun about geometry and mathematics and served as a translator and political counsellor to Ieyasu. For his service, he was awarded great wealth, land holdings and even a lordship, making him the first foreigner ever to be honoured as a samurai. When news of his high standing reached England, a small crew of Englishmen were sent to Japan to use Adams's political connections to open trade between the two countries.

What I have to say:
It's a beautiful story of how trade originally developed between the west and Japan the first time around, complete with fascinating details and citations from the people that were there. Milton's fast-paced story brings the characters and the settings to life. Throughout the course of the book, I found myself experiencing everything from shock and outrage to to love to devastation. At points, I even found myself siding with people that I would never ordinarily side with. Giles Milton took the facts and made a very readable novel out of them.
Unfortunately, I have heard that the story he told is not exactly factual. He has many references and gives many citations, but I've come to believe that not everything was 100% accurate.
There's also the small fact that the title was very misleading. I went into the book hoping to learn more about the life of William Adams, but the book was far more about trade. Very little was actually said about the life of William Adams. Upsetting.
Just one more negative thing - it also seemed very forumlated. As if he took lots of little parts of books he'd read and put them all together, as opposed to actually just writing the story. It kind of made me think that he'd written it as a (very long) high school history paper.
Posted by brizmus at 5:59 AM
Email ThisBlogThis!Share to TwitterShare to FacebookShare to Pinterest
Labels: 3 1/2 stars