We by Yevgeny Zamyatin

I've been on an old-school science fiction kick lately, so if you're interested, here's another old one for the shelves. 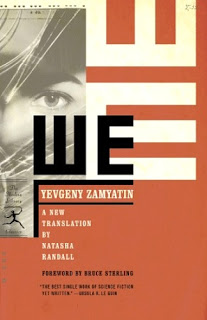 This book was originally written in Russian, and I read the translation by Natasha Randall. Looking for a picture of the cover, though, I came across the cover for the translation by Mira Ginsburg, and I just find the cover(the lowest one) so beautiful that I'm thinking I might need to read this translation, too.

Who Should Read It?mathematicians and science fiction lovers alike along with basically everyone else who doesn't mind thinking a little when they read 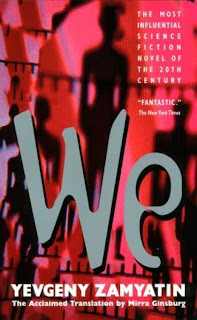 What I Have to Say:In the future, we find communism perfected. These people live in the perfect totalitarian society, and they are content. But are the really?
At first, I wasn't sure about this book. We follow the story of a mathematician through his writings, and it just seemed so impossible to me that a mathematician would rationalize the way this one does. He seems to forget that math cannot exist without chaos. That SO many things could not be done without the presence of i, the square root of -1. Without i, which for those of you out there that might have forgotten your mathematics, stands for imaginary and will be seen in all imaginary numbers, the possibilites of what can be gained from mathematics are cut in half. More than cut in half. I would even go so far as to say that, in order for the rational to make sense, we need i, we need the imaginary.
HOW could a mathematician who understands this like only a mathematician can actually WANT to remove the square root of -1 from himself, from his life, and from his world.
It didn't make sense to me.
As the story progressed, though, I realized that it did. And it really helped me to understand just how far gone this society was. It was so totalitarian that EVERYONE was brainwashed. To believe that there was nothing better. That change and the desire to change and dreams and the desire to dream - that these things were just a sickness. More than that, freedom, and the desire to be free, is the absolute worst sickness of all. A degradation from what is good and right.
Well, when the irrational, unexplainable, previously unimaginable happens to our mathematician, in the form of one of the most irrational things of all, love, all hell breaks loose. Suddenly, he can't get rid of the i within him; he is two selves, and he can't seem to figure out how they go together.
Will he learn what it feels like to be free? Will he even want to?
This book attacks oppression with a viciousness rarely seen, and yet, at the same time, the author seems to hold a warm place in his heart for the potentials of a totalitarian society. It also recognizes that every society has its flaws, be it based on fascism, capitalism, or religion.
This book is incredibly well written and well developed and oh so thought-provoking. It was slightly complicated to read, but I can't help but wonder if this is because some things are lost in translation.
I would go so far as to say that this book is a masterpiece of science fiction, lacking very little.

Summary:I feel like I sort of gave a summary of my own, for once,, with my review. I would provide you with one nonetheless, but I can't find any that don't give away absolutely everything and that aren't ridiculously overly long. So no summary this time.
Posted by brizmus at 5:47 AM
Email ThisBlogThis!Share to TwitterShare to FacebookShare to Pinterest
Labels: 4 1/2 stars

This is another one I've been meaning to pick up for a long time. I love reading about dystopias!

Great review. This sounds like a very interesting book. On the complex side, but a lot of good science fiction is, I find.

Oooh, We! I've been meaning to read this one. Must pick it up. I hope you like the Handmaid's Tale, I remember it as being a very good read.