The City and the Stars - Arthur C. Clarke being awesome; what a shocker!

I think a 1 star book sort of has to be followed up with a 5 star book! 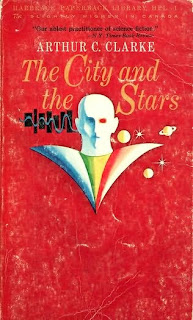 Title:the City and the Stars

Who Should Read It?any and all science fiction lovers

What I Have to Say:I read this book in French, but I'm guessing I'd say the same things about its' fantasticness had I read it in English. The futuristic world that Arthur C. Clarke describes is horrifyingly believable. It is beautiful while at the same time being freakishly simplistic and, dare I say, communistic (is that even a word?). In Diaspar, the last human city in existence, everyone and everything finds beauty in sameness, except Alvin. We follow him on his quest for something different, watching as he is shunned for being different, watching as he struggles to find more. Watching as he struggles to deal with that more, which he finds when he discovers that Diaspar is NOT the last human city. There is another. And THAT is what makes this book so amazing. Over millions and millions of years, two cities of humans have developed in such completely different yet possible ways; one focuses on sameness and technology, the other on diversity and nature. Discovering these two worlds, Arthur C. Clarke gives the reader the feeling that HE has already been there; the clarity of his descriptions are poetic.
This book makes you feel, it makes you think; it makes you step back and wonder what is the purpose of man; it is pure genius. Reading this, one can't help but believe that the human imagination has no boundaries.

Summary (from fantasticfiction.co.uk):Men had built cities before, but never such a city as Diaspar; for millennia its protective dome shutout the creeping decay and danger of the world outside. Once, it held powers that rules the stars. But then, as legend had it, The invaders came, driving humanity into this last refuge. It takes one man. A Unique to break through Diaspar's stifling inertia, to smash the legend and discover the true nature of the Invaders.
Posted by brizmus at 5:31 AM
Email ThisBlogThis!Share to TwitterShare to FacebookShare to Pinterest
Labels: 5 stars

How did I miss this post?? This book sounds amazing! I'm just starting to get into sci-fi, as I hear it's going to be the "next big thing" in YA and some classics are mandatory. You've certainly piqued my interest in this one.

A mathematician AND a French speaker--I'm impressed! (Now I know why you new all about the maths in We!)