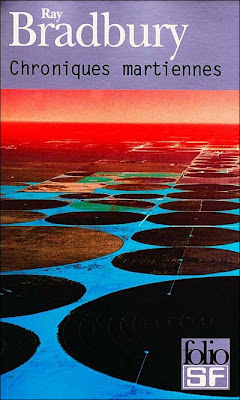 What I Have to Say: Well, first off, I wish that I had known before I started that this was actually going to be a series of short stories with very little link between them all. I might have saved myself the trouble of reading it, since in the end, I really didn't enjoy it.
I'll admit that it was very well written and imaginative, nothing short of what one would expect from Ray Bradbury. The Mars of the future that he creates is one that is easy to believe in (or would be if we didn't already know it wasn't like that), and the changes it goes through over time are almost what is to be expected, sometimes a daring leap away from the expected.
So it wasn't bad. It was just boring. Most of the time. The occasional story that was an exciting, thought provoking, and adventuresome escape from reaility. For eight whole pages, it was easy to forget that I am living today, in 2010, in a world in which Mars is uninhabited by human or other. I would get so into that Mars, not wanting it to end. . .
And then the next story would start, and I would have to force myself to read, to not fall asleep, for a good 70 or 80 pages until the next 8 pages of joy would sneak up on me.
The prose was lyrical and beautiful, and Ray Bradbury's ideas are fresh and different (especially, I imagine, back in the 1940's when it was written). It's really just such a pity that it had to go off and be boring. Because it could have been great. It had potential.

Summary (from Goodreads):Leaving behind a world on the brink of destruction, man came to the Red Planet and found the Martians waiting, dreamlike. Seeking the promise of a new beginning, man brought with him his oldest fears and his deepest desires. Man conquered Mars—and in that instant, Mars conquered him. The strange new world with its ancient, dying race and vast, red-gold deserts cast a spell on him, settled into his dreams, and changed him forever. Here are the captivating chronicles of man and Mars—the modern classic by the peerless Ray Bradbury.
Posted by brizmus at 4:43 AM
Email ThisBlogThis!Share to TwitterShare to FacebookShare to Pinterest
Labels: 3 stars, science fiction

Which short stories from it would recommend so we can read those and skip the rest?

Thank-you for linking your giveaway to Contest Central. I would enter the contest but I'm not into vampire books anymore.

Well, Lenore, I read the book in French, so it's sort of hard to say - I'll translate the names of the ones I liked, but they could always have been translated differently from the original than what I will go back to.
I'll do my best, though:
My favorites were
-The Summer of the Spaceship (L'ete de la fusee)
-The Men from Earth (Les hommes de la Terre)
-Balls of Fire (Les Ballons de Feu)
-Usher House (Usher II)
-High Up in the Sky (Tout La-Haut dans le ciel)
-Picnic in A Million Years (Picque-Nicque dans un million d'annees)