Perhaps you remember a little while ago, I posted about the weird love that Japanese have for 自動はん売き (vending machines). Specifically in regards to the BANANA vending machine that recently popped up in Tokyo. 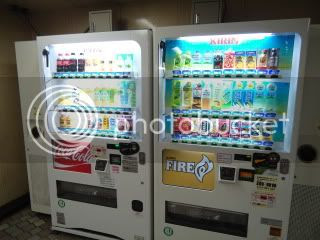 Well, last time I was in Tokyo, I also saw something else totally awesome.
And it was this: 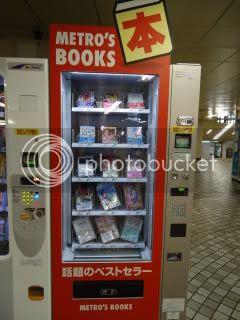 Now, I'd heard before about people that live in places with book vending machines, and to be honest, I'd always sort-of thought it was a myth.
I was thrilled to discover that the myth of the book vending machine was actually TRUE! For serious! Now, if only I the books were in English. Or rather, if only I could read Japanese.
Posted by brizmus at 9:48 AM
Email ThisBlogThis!Share to TwitterShare to FacebookShare to Pinterest
Labels: jf

I fully support a book vending machine haha. That is beyond awesome.

You know that sound affect you hear in movies for the pearly gates. I totally just heard that in my head. How super dooper way cool. Tell me that wouldn't do well in the NY Subway system?

Wow a book vending machine - another great source, it's just as well we don't have them here (yet) as it would be another form of temptation for me to resist.

I have now see everything!