Review: In the Garden of Men by John Kupferschmidt 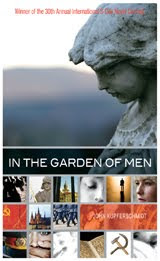 Title: In the Garden of Men

Who Should Read It? I think this is a great book for adults and teens, alike. As long as adult books appeal to you, and you enjoy a little thinking and don't mind a bit of politics (you can enjoy politics, too - that's okay!), this book could be great for you.

What I Have to Say:
In the Garden of Men is the 2007 winner of the 3-Day Novel Contest. As such, going into it, I wasn't entirely sure what to expect. I mean, how can one really write anything significant in a mere 3 days?
By the end of the first chapter, though, any doubts that I may have had were assuaged. It became immediately clear that Kupferschmidt's exploration of Soviet-era communist Czechoslovakia was going to be meaningful in a very intense way. It was the first paragraph of the book, actually, that did me in.

This particular issue is one that has plagued me for as long as I can remember. What is good? Goodness, or morality, rather, is defined by any particular society. When a culture comes together and agrees as a unit that something is good, does that thus make it good? Before the Civil War, Americans has decided that slavery was good. Some citizens disagreed, and they fought against it and, for the most part were punished for this but eventually, because of those people, Americans were able to change their minds and decide that slavery is actually bad. Goodness is relative.

This is why, despite our main character's assessment that he does not believe in goodness, I knew he had to be good, and I knew I would "get" him. I believe it takes a good person to understand that "good" doesn't really exist. This is also why I knew I was going to love this book.

We follow the main character, a blase nobody, a government worker who prefers not caring to thinking, as plays the role of perfect communist, acting as a pawn for the government not because he believes in his government but because he just doesn't care enough to do otherwise. As he slowly is forced by external circumstances to think about his role in society and judge himself as he has previously, unthinkingly, judged others, to come to terms with the things has has done and is being asked to do. And, most importantly, as he learns to take responsibility for himself and for his actions as opposed to allowing himself to be blindly led along by a communist state that he does not and cannot believe in.

Kupferschmidt writes with a humility rarely seen in modern authors. His storyline, while in and of itself simple, is woven through with complex, profound thoughts and intriguing twists and turns. The easy stream-of-consciousness flow is beautiful, captivating, and more than that, real. What happens in this book is so important that understanding it as something real, I think, is vital. While what happens is in the past, it reminds you that being aware is necessary and that we shouldn't let society define things for us - we are allowed to disagree, and even if we can do very little about it, we can, at the very least, change ourselves. Which is one step in the right direction.

If it's not totally evident, I loved this book, and I really think you will, too! It's short and easy to read, and, while you may not love it as much as I did, I sincerely doubt that you will be disappointed.

Summary:In 1968, an inconsequential government worker finds himself swept into the mechanism of state oppression when the Soviet Union invades Czechoslovakia. Put to work processing the warrants for anyone who opposes the new regime, he falls quickly into the moral no-man's-land of repressive bureaucracy. As his signatures send thousands to their fate, a series of encounters with a priest, a prostitute and the ghosts of the disappeared forces him to face the fundamental choice between action and safety.

Cover Story: I think this cover is beautiful. The sad look on the angel's face, to me, really captures the feel of the book.

Posted by brizmus at 7:50 AM
Email ThisBlogThis!Share to TwitterShare to FacebookShare to Pinterest
Labels: 4 1/2 stars

This sounds like a fantasic read, I really enjoyed the snippet of story you posted, so I'm definitely going to add this to my wishlist! :)

wow, this one sounds really deep!! But worth the effort to look at things a little closer.