Have you ever seen a cicada? I actually hadn't before I came here. And if I'm being totally honest, I'd actually never even HEARD of them before moving to Japan. 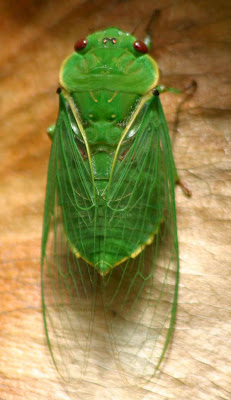 And boy have I heard them. Nonstop. All the time. Some days, I don't want to spend a bagazillion yen just so that I can have my air conditioner on, so I think I want to open my window. But no - think crickets but a million times louder and more grating. The cicadas love to make noise.

You might be wondering what this has to do with anything. Why I would post something like this. So far, it's the only thing about Japan that I really dislike. And to be honest, I think it wouldn't bother me, except that the sound of the cicada has become one of the few things that can distract me from reading.
I just can't seem to concentrate while they are playing their nonstop song.

Is there anything that always manages to distract you from reading, no matter how into the book you are? I want to hear about it!
Posted by brizmus at 5:40 PM
Email ThisBlogThis!Share to TwitterShare to FacebookShare to Pinterest
Labels: ff, jf

That would annoy me too!

unfortunately I have experienced cicadas as there is a big invasion of them every 7 years (I think) in Baltimore and they are everywhere. It's really disgusting.

I'd love to enter your button contest except I have no artistic ability. I look forward to seeing the other entries though.

Oh, I sent you two buttons last week, didn't you get them?

I'm usually very difficult to distract when I'm reading - except when there's something else I really should be doing but I've decided I'm going to read anyway. THEN I'm very easily distracted - it's the guilt!

I see !!, Your writting could change the world that you want. Express your thoughts!!. Politics , Business , Entertainment , Sports & Games , Life & Events ,and Health what else?. Meet your like minded here. The top social gathering in one place all the top notches meet here. It is not about win the race, participation is all matters. We proud inviting you to the the internet's best Social community. www.jeejix.com .

oooh I dont like that green thingy. :) I would scream if I saw one in my room. Oh don't want to think about that.

My boyfriend types REALLY loud. When I'm sat there reading, the sound of it starts inching into my consciousness, and it just bugs the hell out of me lol!