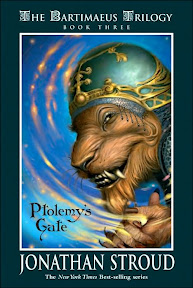 Who Should Read It?Anyone into fantasy, only after having read and enjoyed (which of course you will) the first two.

What I Have to Say:Jonathan Stroud totally did it. After starting to get (VERY) minimaly bored with the second part of this trilogy, I was worried that Stroud wasn't going to be able to pull of the boom of an ending that the first book deserved and made the reader expect. But he did, and this is an AWESOME book! It is laugh out loud hilarious, it sometimes makes you step back and say whoa, and I think there was even a point where I cried (not for long, though, because Bartimaeus's snarky comments were just too funny for sadness). Kitty and Nathaniel became the characters I thought that they should have been in the second book. It was great to see both of them grow up and watching their relationships develop. Bartimaeus was back and even whittier than he was in book number 1.
It was also exciting to get to learn more not only about Bartimaeus, but also about Ptolemy, about whom we had heard little snippets in the previous two books, and his relationship with Bartimaeus. It's awesome the way that, over the course of the book, the reader really comes to understand Bartimaeus and how he developed his personality.
While being an incredible page turning fantasy, Ptolemy's Gate also broaches head on class issues, acceptance of those that are different, pride, and war.
This book is sheer awesomeness, a total success, and possibly and probably even the best of the trilogy.

Summary(direct from Amazon):Three years have passed since the magician Nathaniel helped prevent a cataclysmic attack on London. Now an established member of the British Government, he faces unprecedented problems: foreign wars are going badly; Britain’s enemies are mounting attacks close to London; and rebellion is fomenting among the commoners. Increasingly imperious and distracted, Nathaniel is treating Bartimaeus worse than ever. The longsuffering djinni is growing weak and vulnerable from too much time in this world and is nearing the end of his patience.

Meanwhile, Nathaniel’s longtime rival Kitty has been stealthily completing her research on magic, demons, and Bartimaeus’s past. She has a daring plan that she hopes will break the endless cycle of conflict between djinn and humans. But will anyone listen to what she has to say?

Oh yes, I seriously want to read this one. It is the continuation of Nathaniel and Bartimaeus attempting to save humans.
Your review set the stage and now I want to read book 1 and 2.

See this is what I meant with mu comment on Golden Eye. The third book gets it right !

Seriously, I want to read this book, and the other books in this trilogy!

I'm embarrassing to say I haven't really heard of these, other than by name.. and I don't know why. They sound amazing. I really want to read these books! Great Review, you sold it for me!

This is the only book missing in my Bartimaeus Trilogy.I see you love the book!!

Haven't read the second one yet but definitely putting it closer to the top of my TBR pile.