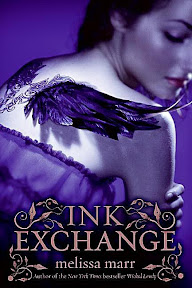 Summary (from School Library Journal):Leslie lives with a father who has given up on life, a drug-abusing brother who allowed his dealer to rape Leslie in lieu of payment, and a burning desire to banish pain and fear from her life. Unable to confide in her best friend, Aislinn, she devotes herself to working to pay the family bills and to get the tattoo she believes will help her reclaim her body. What she doesn't know is that the art she has selected will bind her to Irial, the king of the Dark Court of Fairy. He removes her emotions like fear, panic, or anger, and uses them to nourish the fairies of his court. What Irial doesn't expect is his growing love for Leslie and her desire to make her own choices. In Leslie, Marr has created a damaged, wounded character who still comes across as being incredibly strong. Irial needs to care for his court, knowing them too weak to win a war, but his feelings for Leslie make him unwilling to do what needs to be done.
Posted by brizmus at 8:05 AM
Email ThisBlogThis!Share to TwitterShare to FacebookShare to Pinterest
Labels: 3 stars

Sorry girl, it sounds pretty terrible to me. There is way too much evidence that tattoos don't heal people.

On another note, the word verification for this comment is "hellshir" and I promptly typed in the box "hellshit" because it just seemed more natural that way. But then I changed it so I would be able to post my comment =)