Review: I Wanna Be Your Joey Ramone by Stephanie Kuehnert 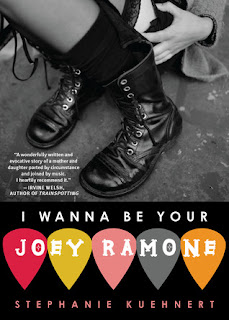 Title: I Wanna Be Your Joey Ramone

Who Should Read It? Great book for those who like real books about real teens (with an odd little step up), or especially those who went through a punk rock or rebellious stage in their teenage years. I would say that it's not for the younger teen reader, because of how much it deals with sex and drugs, but really I think that's for the younger reader (and their parents) to decide - as I think that's part of the point of the book: it's never too early to start being screwed up.

What I Have to Say: Gritty. Raw. Real. This book, just like it's theme, is punk rock. As a lover of punk rock for as long as I can remember, I have very structured opinions about the music and the scene, and there are things I hate about it and things I love about it. In "I Wanna Be Your Joey Ramone," Kuehnert doesn't gloss over the bad to focus on the good. She gets right down to the meaty heart of the matter and spits it in your face like a true punk rocker. This book may be YA, but make no mistake, it is NOT light reading.

There is no sugar coating and no trying to make life easy, and it makes it very clear that, even for those people who might have a foot already in the door (like, say, because they are awesome at guitar and capable of writing amazing songs), this in no way means that things will always be easy for them. Life is hard, and some people deal with it well, and some people don't, and Emily Black is one of those special people that does both simultaneously. She is a believable and crazy and sane and everything that I don't like about punk rock while at the same time being completely lovable.

And I did love her, for the most part, even though I sometimes wanted to shake her and force her to make what I thought were the right choices. But then, that's one of the major things that this book is about - making the wrong choices and still managing to end up in almost the right place. I don't know a single person that has consistently, throughout life, only made the "right" choices, and yet if we persevere, most of us end up okay. That's what's important - that we keep on going and making an effort, and, most importantly, that through it all, we stay true to ourselves. It's harder than one might think, as Emily Black's story proves.

This book was fast-paced, exciting, and scary, and I highly recommend it to anyone. Kuehnert should be commended for the honesty with which she broaches such a screwed up normal world. I loved this book!

Punk rock is in Emily Black's blood. Her mother, Louisa, hit the road to follow the incendiary music scene when Emily was four months old and never came back. Now Emily's all grown up with a punk band of her own, determined to find the tune that will bring her mother home. Because if Louisa really is following the music, shouldn't it lead her right back to Emily?

Cover Story: I can't even express how much I love it! It's perfect!
Posted by brizmus at 7:48 AM
Email ThisBlogThis!Share to TwitterShare to FacebookShare to Pinterest
Labels: 5 stars

I've read Stephanie's Ballads Of Suburbia and loved it. This one sounds just as gripping an honest as Ballads. Thanks for the review! :)

It's different from what I usually read but it sounds interesting as well. It's been years since I read any edgy YA, most of the stuff being either light and fun or fantasy.

The book sounds like something with a punch, do I say that right? I don't know if this one is for me, but maybe I will try it..if I can find a copy here. :)

Great review! This book sounds so good, honest and realistic! Have to put it on my TBR list! ;)

Nice review, and the book sounds good. I do like my books normal now and again

I've so been meaning to read this! and what a punk awesome review - i know i'll love it but am also scared for some reason? haha.

I never understood the whole...goth, punk, emo thing. As much as I try to keep an open mind I dont think this is in my taste.

Rock I get though. HUH weird.

I really like the way you start by saying who should read the books. I find it really helpful. Thanks.

Have you checked out ch 1 of Lethal Inheritance on my blogsite yet?

Well if you searched for shoelaces i'm sure you could find a ton of cool designs and stuff.