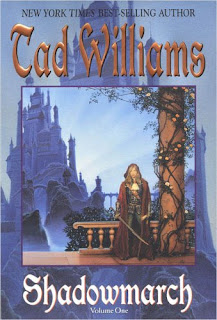 Who Should Read It? This is epic fantasy at it's absolute best, but I should also warn you: it is DARK. So if you're not a huge fan of dark epic fantasy, this might not be for you. If you don't mind a little dark, though, I really can't see how you will be disappointed.

What I Have to Say:
Lately, I have been rediscovering epic fantasy, and I don't know how, but I seem to pick only the most amazing books with which to rediscover it. Because that is exactly what Shadowmarch is. Amazing. Tad Williams has constructed a creative, intelligent, solid piece of dark epic fantasy, and I'm a fan

What I most liked about Shadowmarch is that it is far more than just an epic fantasy. It is full of complexities. He takes familiar ideas and familiar things and turns them into SO much more - making you wonder why any other author would ever even try with similar ideas. Tad Williams has already done it and done it so well that it seems there's no point. (though I will admit: there were some things reminiscent of the Fraggles and the Borrowers, and I would be dreadfully sad if those didn't exist). It starts off so easily that, despite the length, you'll be halfway through before you know it and wondering where all the time went. I recently reviewed Acacia by David Anthony Durham, and in that book I was impressed with the parallels to the different countries we find in our world today; they were obivous without seeming forced or lacking in creativity. While, in Shadowmarch, the parallels to our world seemed to focus more on already dead civilizations, I was even more impressed with Tad William's way of making his story seem relevant while still allowing it to remain 100% fantasy.

I feel like I could turn this review into something almost as long as the book itself, but it seems kind of pointless as I gather it has already been done a thousand times before, and it would just give away too much. I almost think it is best to go into this book blind for ultimate enjoyment. So, to finish, there was just one small thing that I didn't love about the book, and that was that, with one minor exception, I didn't actually connect to any of the characters. They all seemed like they were only STARTING to be developed, and, since the book was so long, it seems like it could have taken a bit more time to help us empathize with the characters. But then, there are more books to the series, and I'm figuring by the end, I will either love or hate all of them. BEcause of this, though, it does occasionally feel SLIGHTLY slow moving towards the middle.


Summary: Shadowmarch has lately fallen on hard times. Its king has been captured by a rival kingdom, the regent has been mysteriously slain, and the new regents are callow fifteen-year-olds. Moody, crippled Prince Barrick is uninterested in their responsibilities and haunted by eerie dreams. His twin, Princess Briony, takes their new duties seriously, but is hot-tempered and headstrong. How can they defeat the greatest threats in Shadowmarch history? Their nobles plot to overthrow them--and the plotters may include their pregnant stepmother, seeking the throne for her own child. The expanding empire of Xis has sent its agents into Shadowmarch. And, for the first time since it appeared centuries ago, the Shadowline has starting moving. As the maddening mist spreads south over Shadowmarch, it does not quite hide the powerful, uncanny, and vengeful Qar army of invasion

Cover Story: This is another case of me not having seen the cover before reading the book. I do love it, though. It goes nicely with the feel of the book, and I find it appealing enough that it would have made me want to read it beforehand. The only problem is the slight cartoony feel which doesn't mesh at all.
Posted by brizmus at 7:48 AM
Email ThisBlogThis!Share to TwitterShare to FacebookShare to Pinterest
Labels: 5 stars

I was bored by this one..BUT I did read it in Swedish and Swedish fantasy translations honestly sucks, so ..

The cover the girl looks bored

I love this cover so would have been disappointed if you had said it wasn't a good read. More husband dearest's taste than mine, I'd certainly be willing to give it a try though. Thanks for the recommendation.

Happiness is a personal thing. So in doing whatever job, making whartever decision, we should do it ourselves and not letting other to do it for us.

Hey - just saw this - thank you for your enjoyment of Tad's work! If you'd like an extract from Shadowheart (last & 4th volume, just published), email me - deborah.shazam@batnet.com - Tad's business partner/manager/wife. Best wishes, & thanks again! Deborah

Another Tad Williams fan here. I used to hate Tad Williams -- he doesn't want me to stop reading his books. They are just so good. The Shadowmarch series, for one, is so good because of the depth of detail and mythology that can rarely be seen among many other high fantasy novels. Only he writes a few books every few years and that makes the waiting even more harder because he can juice up a very good story. I just wish he can write much faster.