Last week in Japanese class, we read a short 10 to 15 sentence story called "Hachiko." It was SO sad that I literally started CRYING IN CLASS. I would have been embarrassed, but I was too depressed from how sad it was. Basically, a professor finds a dog, an Akita, which is a royal Japanese dog, and they do everything together. One day, the professor dies, and every single day for the next *9* years, the dog goes to the train station to wait for his professor to come home. It's really the sweetest story ever.

I of course immediately came home after class and watched the US movie version of this story with Richard Gere. I heard that us Americans had DESTROYED the story, but the fact is, the movie was wonderful. It was so emotional and fabulous, and I must have cried for at least 4 hours. I started about midway through the movie and then just didn't stop until long after it was over. I highly recommend checking this movie out!

Now, I'm dying to read some longer versions of this story. So far I have found this, which seems to be a beautifully illustrated picture book: 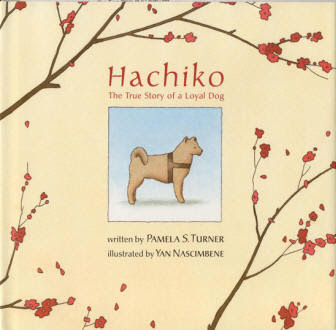 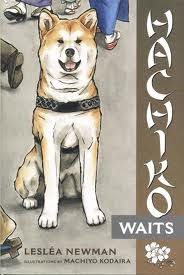 which seems to be for middle school aged kids.

Do you guys know this story? Do any of you have suggestions for books that might do it justice?

Now, what I want to know is, is there any story that has affected you this way? A story that brings tears to your eyes just at the mere thought of it. A story that could be summarized into ten sentences and would still make you cry? I want to know!
Posted by brizmus at 9:03 AM
Email ThisBlogThis!Share to TwitterShare to FacebookShare to Pinterest
Labels: ff, Japan, jf

AHHHHH I want to read it :)

I'd love to read it too, such a sweet and heart-warming story!

Hachiko's loyalty has also reminded me of Greyfriars Bobby, a dog who guarded his dead master's grave for 14 years.

Sounds too sad to read. I love all those covers but the middle one really is something special.

I'm so impressed that you are reading in Japanese. I think I need to make more of an effort to start reading books in Hebrew.
I'm not much of a crier but there is one book that whenever I try to tell people about it I get choked up each time. That book is My Sergei: A Love Story by Ekaterina Gordeeva, the true story about the Russian ice skaters Gordeeva and Sergei Grinkov who were ice skating partners as children and they later fell in love and got married, and then one day Sergei suddenly had a heart attack, on the ice and died. It's such a sad and beautiful story.

Blimey. I don't think I've found one of those yet but if I do I'll let you know. I didn't realise the story came from Japan. I wanted to see the film. I will definitely borrow it from Blockbusters now. Great post Audrey!

I watched the movie too. It was surprisingly well done! I really couldn't stop crying though. *sniff*