The other day I was saying something about how my favorite kind of music is really sugary, bubblegummy, poppy punk rock, and Alexis replie with something like "I don't believe you. Every time I hear you listening to music, it's that folk metal or whatever."
And I realized she was right. I'd been listening to so much metal that bubblegum punk was slowly taking the backburner, and this saddened me.
So since then, I've been rocking out to the awesomeness of bands like the 20 Belows, the Yum Yums, the Riverdales, the Queers, the Ergs!, Screeching Weasel, etc. . . And not to be forgotten, of course, the Unlovables.
And I was reminded that, like there is a Southpark episode for every life circumstance, there is an Unlovables song for every Audrey life circumstance.

And right now, the song that describes my life is Disaster, even though, for me, my life is totally not a disaster.
Go here and listen to it, and I assure you, you will be rocked.

Anyhow, things have been fairly uneventful since the last time I wrote.
On Wednesday, we had a big test that was the same as the placement test that we took when we first got here.
We got the results back on Friday. 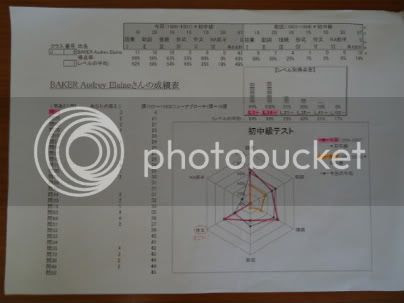 That orange circle that you see is where I was when I first got here. The pink circle is where I am now. I feel happy because I super advanced a lot (more than the other people in my class, as their original circles were all way bigger than mine). I missed one question from the things that we did this qusarter, and I feel really stupid about having missed it. Immediately after turning in the test, I rethought about it and knew I got it wrong. As for the things I wasn't supposed to know (i.e. that we didn't cover this quarter), well, no shocker, I didn't know them.

Wednesday, after the test, I had dinner at the student village (that's, like, the real Yamasa dorms) with some people I know over there. Laura made the most scrumptions vegan spinach quiche, and I wanted to eat ALL of it, but unfortunately I had to be nice and share. Also unfortunately, the last one got burned to a char. :-( 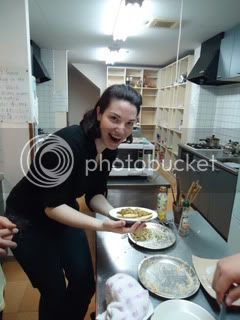 On Friday night, I went over to Lyn's again, and she made a delicious cabbage potato stew, and it was DELICIOUS. I seriously love having people cook for me. We watched Naussica in the valley of the wind, and it was fabulous! It's one of my favorite Miyazaki movies (maybe they all are one of my favorites?), and I was happy to watch it again. Especially as it was super rad to understand some of it.

Saturday, I skipped French teaching (I know, I know, I am horrible) and instead went shopping with Martin for a bday gift for his lady friend. And then we took pictures of us jumping around in the rain. 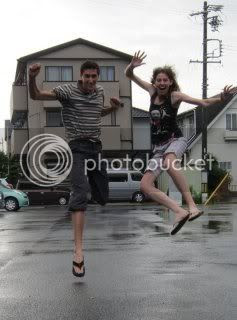 Apparently Martin and I love taking pictures of ourselves. It reminds me of hanging out with Josh back at NYU, and it is fabulous fun!

Saturday night, Alexis, Jenny-Lyn, Lauren, and some others went over to Aoi Hall/Zig Zag (the school bar to which I can't really go because you're allowed to smoke inside), where they had screens set up and were playing the Japan/Netherlands World Cup game. The game was pretty much boring and actionless, and Japan lost (::sob::) but good times were nonetheless had. 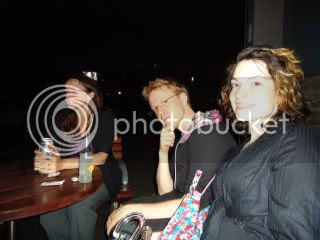 Jenny-Lyn, Lars, Laura
I know, I know, I suck at taking night pictures!
It was weird to ENJOY going out and being out and talking to people I don't know again. I feel like I turned into this weird anti-social hermit while I was living in France, and living here is turning me back to myself, when I had previously just thought I was getting old.

And that is all.
(Except that I also apologize for the ridiculous size of these photos. Picasa is STILL not working with my connection, which is ridiculously annoying, and photobucket is screwy. Can anyone think of a better photo hosting site?)
Posted by brizmus at 4:03 AM
Email ThisBlogThis!Share to TwitterShare to FacebookShare to Pinterest
Labels: Japan, quiche, soccer, veganism, yamasa

I love this post. It looks like so much fun and how cool is it that you've already learnt so much?!

I like your blog !!Thank you. They are really great .
do not miss my goods , they are very beautiful !!
Yves Saint Laurent
Tory Burch
Christian Louboutin
Men's Shoes
Women's Shoes
New Arrivals