Review: The Silver Dream by Michael Reaves and Mallory Reaves 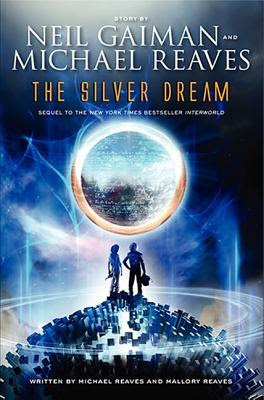 Who Should Read It?you definitely can't read the Silver Dream without having first read Interworld, but if you're into sci-fi/fantasy action youthful excitement, check this series out!

What I Have to Say:
Joey Harker is back, and he's just as brave, courageous, and troublesome as ever. Just like with Interworld, in the Silver Dream be ready for an adventure full of magic, logic, technology, and mind-blowing time-bending, and it is the absolute perfect follow-up. Interworld got a bit clunky and wordy at times, which led to it occasionally being somewhat boring. The Silver Dream did no such thing; it started off with a running jump, with the introduction of the mysterious and super-cool Acacia, and continuing soaring right up until the very end.

My favorite part of the Silver Dream was that we got to know some of the other "Joeys" a bit better. None of them were nearly as well developed as THE Joey (perhaps one of the problems with this book; the only character who seems to go through any character development at all is Joey Harker, the main character), but it was fun getting to know them and better understanding how they interact with each other and how they live on Interworld itself.

I really love the idea of the Interworld series in general. Versions of the same person from all the parallel universes (there seems to be an endless number of them) are able to "walk" through the universes, and, as such, they have all come together to protect the "ultraverse" from the bad guys (HEX and Binary, super cool bad guys). I genuinely can't imagine what it would be like to meet the "me" from different parallel universes, and I love reading about how they react to each other, what they think about each other, and, more than anything, the WAY the think about each other.

The Reaves/Reaves team does a great job of keeping this story fast-paced and interesting, action-packed but with enough back story and intrigue to keep even those not so into action interested. I've read a lot of reviews saying that Interworld #1 was better than this, but (and Gaiman is one of my favorite authors, so I almost feel bad saying this), I liked the Silver Dream better. I felt like it flowed better, like things were better explained. And, what was most important to me, like Joey was finally coming to understand WHY he was different than the others, which in the first book, as a topic, was totally ignored.

Anyhow, you definitely can't read the Silver Dream without having first read Interworld, but if you're into sci-fi/fantasy action youthful excitement, check this serious out! It was left on a severe cliff-hanger, so I just hope that I haven't forgotten to keep caring by the time the next book comes out!

Summary:Sixteen-year-old Joey Harker has just saved the Altiverse—the dimension that contains all the myriad Earths—from complete destruction. After mastering the ability to walk between dimensions, Joey and his fellow InterWorld Freedom Fighters are on a mission to maintain peace between the rival powers of magic and science who seek to control all worlds. When a stranger named Acacia somehow follows Joey back to InterWorld’s Base, things get complicated. No one knows who she is or where she’s from—or how she knows so much about InterWorld. Dangerous times lie ahead, and Joey has no one to rely on but himself and his wits—and, just maybe, the mysterious Acacia Jones. Full of riveting interdimensional battles, epic journeys between worlds, and twists and turns along the way, this sequel to the New York Times bestselling InterWorld is a thrilling, mind-bending adventure through time and space.

Note: An e-copy of this book was received by Edelweiss in exchange for an honest review

Great review, thanks for the recommendation.