Review: A Discovery of Witches by Deborah Harkness 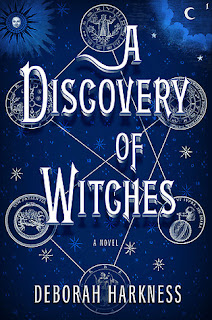 Who Should Read it? Like books about magic? Quirky, adorable witches? Vampires and Demons? Then this book is for you; especially if you are tired of the nonstop romance that most vampire books seem to be. Don't get me wrong, this book has romance, but it's also got something that makes it feel a little more literary. It's important, though, that you don't a book with a lot of detail that takes a while to get to the point.

What I Have To Say:
Diana Bishop is not your typical witch. Born to a long line of witches, she decided to give up witchcraft at a young age, in an attempt to live a normal, magic-free life. But I guess normal is all relative, and witchcraft may be more impossible, and more dangerous, to give up than she ever thought.

I loved this book. It was like historical fiction meets magic, thus combining two of my favorite genres. The history comes from Diana herself - she is a quirky, independent, strong-willed and totally lovable character (who seems way more like a high-schooler than a full grown historian), and she has given up the life of magic to lead a totally ordinary life in academia, where she studies, of all things, alchemy. I immediately connected to her.

The book starts when Diana uncovers a book, Ashmole 782, that just so happens to be a book all the witches, demons, and vampires have been searching for for ages. How did she get her hands on it? Will she do it again? Suddenly, the library where she is working is FILLED with all sorts of magical creatures trying to figure out the answers to these questions. And of course, one of the creatures to show up is, naturally, a REALLY HOT vampire by the name of Matthew Clairmont. And, as must happen, because he is a vampire and a creature of lust, and despite Diana's natural and understandable fear of vampires, they fall immediately in love and, within 3 weeks, are wondering how they could ever be separated.

I understand that vampires supposedly have that effect on people, but I'll admit it - I'm sort of tired of reading about it. Diana is witty and charming and, most of all, INTELLIGENT, and I just can't believe that she would allow herself to be enamored so quickly. By a vampire. I know, I said I loved it, and now I'm ranting - this bit really did bother me, and I wish Harkness had managed to make this book happen WITHOUT vampires and love-at-almost-first-sight, but I also understand that it was necessary to set things up for the rest of the book.
Which was AMAZING!

Harkness uses lavish descriptions, painstaking and well-researched details, and witty conversation to move the plot along. And even though it was only her first novel, she masterfully weaved the world and idea of magic together with the world of academia and logic. It's beautiful, historical paranormal fiction, and I loved it. I'd read a lot of reviews that said some of the research and detail was overdone, but in the end, I totally disagree. I had a great time imagining all of the beautiful places, the intricate architecture she described. And I was presented with just enough information on the history of alchemy that I found myself wanting to actually research it myself.

So, the verdict - this book was amazing; I loved the detail, I loved the information on alchemy, and the only things I would change are the love story and the vampires. And I will definitely be reading the sequel just as soon as I manage to catch up on all the other books I have to read.

Summary: A richly inventive novel about a centuries-old vampire, a spellbound witch, and the mysterious manuscript that draws them together. Deep in the stacks of Oxford's Bodleian Library, young scholar Diana Bishop unwittingly calls up a bewitched alchemical manuscript in the course of her research. Descended from an old and distinguished line of witches, Diana wants nothing to do with sorcery; so after a furtive glance and a few notes, she banishes the book to the stacks. But her discovery sets a fantastical underworld stirring, and a horde of daemons, witches, and vampires soon descends upon the library. Diana has stumbled upon a coveted treasure lost for centuries-and she is the only creature who can break its spell. Debut novelist Deborah Harkness has crafted a mesmerizing and addictive read, equal parts history and magic, romance and suspense. Diana is a bold heroine who meets her equal in vampire geneticist Matthew Clairmont, and gradually warms up to him as their alliance deepens into an intimacy that violates age-old taboos. This smart, sophisticated story harks back to the novels of Anne Rice, but it is as contemporary and sensual as the Twilight series-with an extra serving of historical realism.

Cover Story: Totally love it! Just looking at it makes me want to study witchcraft. :-)
Posted by brizmus at 12:53 PM
Email ThisBlogThis!Share to TwitterShare to FacebookShare to Pinterest
Labels: 4 1/2 stars, a discovery of witches, deborah harkness, fantasy

I couldn't agree wi your review more! The detail and historical background used in this book make for a rich, multi-layered read. Anyone inclined to can disappear down the rabbit hole of researching the places and names of the characters - they all have significance! The books have been optioned by Warner Brothers and a script written. I sincerely hope that Richard Armitage is cast as Matthew Clairmont. You can check out the crusade here: www.armitage4clairmont.com or www.facebook.com/armitage4clairmont

On my TBR pile since Christmas. Great review, having read it I'm going to bump this one up the list and make it a priority read.