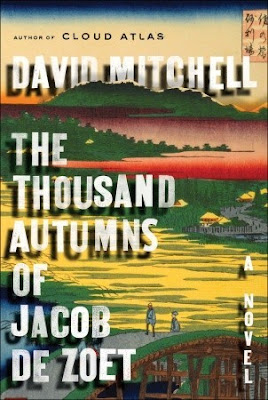 What I Have to Say:
I'm going to be honest with you. I almost put this book down and didn't finish it - which is just NOT something I do. If I start a book, I finish it. Period. But the first 150 pages or so of this book were just PAINFUL for me to read. This book takes a look at what it was like in the late 1700s, early 1800s, on Dejima, a small Japanese island right off the coast of Nagasaki, where Dutch traders lived. It should be noted that this was a very xenophobic time for Japan, in which the Japanese traded with the Dutch and ONLY the Dutch (no other foreigners allowed), and the Dutch traders were RARELY allowed off Dejima and onto mainland Japan.

The book starts off on a positive note, when a female Japanese midwife manages to successfully deliver the baby of the magistrates concubine. The story then immediately turns to the Dutch living on Dejima. The lying, cheating, gambling, whoring Dutch who speak in such harsh, perverse slang that it took extreme effort to actually understand what they were saying and even more effort to actually want to understand what they were saying. I couldn't care less about these Dutch men and what happened to them, and if I had thought it was going to be about them, I would have put the book down.

Luckily (for me), though, there was the decent, virtuous Jacob de Zoet who stood out amoungst a group of repulsive slum. David Mitchell breathed such life in this character from the debut that, despite how awful I was finding the book (which, in retrospect, was sheer genius on the part of Mitchell, as it allowed the reader to get a real feel for what life must have been like then and what de Zoet must have been suffering with life on Dejima), I found that I kept reading just to figure out where things were going for him. And for Ogaewa, Aibagawa, Lord Enomoto, Dr. Marinus, and all of the rest of the large cast of characters that Mitchell put together (for a book with so many characters, he sure managed to breathe life into all of them).

And I am SO glad I did, because I sped through the last 400 pages of the book at record speed. The Japan of 1799 came alive for me, the customs, the characters, the way of living - everything was beautiful and brilliant, and I felt as if I was actually there. As the story progressed, de Zoet became more and more the good guy that the island of Dejima needed, and it became more and more evident that the villain wasn't Dejima itself, but a certain Japanese (whose name I will not mention for fear of spoiler).

As usual, David Mitchell has given us not just a compelling protagonist, but a compelling villain in a compelling setting complete with a rich plot that will leave you page-turning with desire up until the very end.

Aside from the usual David Mitchell brilliance, I thought one of these things that ultimately made this book so great was the way he dealt with the issues - the racism, the sexism, the religious differences, the blasphemy, etc. Today, we look at all of these things, and we think: moral issue. Back then, though, things were different, and they were even more different in Japan. And he dealt with these issues as they may have been dealt with back then, going into just the right amount of depth, while still managing to throw a modern day twist by actually acknowledging that these things are moral issues. It really brought to home the impossibility of life back then for a woman or a slave. Or, in Japan, even a person with thoughts of their own.

"The Thousand Autumns of Jacob de Zoet" is full of laughs, it will make you think, make you cry, make you question, and leave you ultimately forgetting the you read about the characters in books (instead thinking that they were people you might have known in a previous life). Jacob de Zoet is a masterful storyteller with a masterful writing style and a creative mind to boot.

Summary:In 1799, Jacob de Zoet disembarks on the tiny island of Dejima, the Dutch East India Company’s remotest trading post in a Japan otherwise closed to the outside world. A junior clerk, his task is to uncover evidence of the previous Chief Resident’s corruption. Cold-shouldered by his compatriots, Jacob earns the trust of a local interpreter and, more dangerously, becomes intrigued by a rare woman—a midwife permitted to study on Dejima under the company physician. He cannot foresee how disastrously each will be betrayed by someone they trust, nor how intertwined and far-reaching the consequences. Duplicity and integrity, love and lust, guilt and faith, cold murder and strange immortality stalk the stage in this enthralling novel, which brings to vivid life the ordinary—and extraordinary—people caught up in a tectonic shift between East and West.

Cover Story: I love this cover! Oh so beautiful and oh so Japanese. The colors and the idea are just right. :-)

I love some good historical fiction and I love Japan. I will definitely pick this one up. Beautiful review!