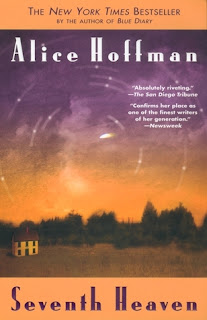 Who Should Read It?
It's really hard to say. This book is not at all what I expected. Somehow, I feel like saying "adults." I don't really know why, but it seems like maybe "adults," whatever that means, would enjoy it.

What I Have to Say:
This book really was NOT what I expected. I had never read anything Alice Hoffman before, and based on the reviews I had read of this book, I expected something beautifully real, magically simplistic. Unfortunately what I got was a motley crew of characters with whom I couldn't relate living what seemed to me to be awful lives and doing awfully stupid things.

This story is, overall, about a woman named Nora, a divorcee with two children who moves onto a street of married ladies who seem to think divorce is one of the worst possible things that could happen. Nora is an interesting character who could be more interesting but is unfortunately underdeveloped. Hoffman spends so much time jumping back and forth, back and forth between all of the characters living on the road that you never get a real feel for any of them. There are some for whom I THINK I am supposed to feel sympathy (Nora actually being one of these) but who I instead severely dislike. There is so much bad in all of the characters, and the author doesn't do nearly enough to show us that they may have a good side as well.

This wouldn't be a problem, except that it seems like she TRIES to. And fails. And so what we end up with instead is a story that trudges on for FAR too long while we wait for something to happen to characters we don't care about. And then when the book FINALLY ended, I still wasn't entirely sure why I had read it. Sure, some transformations and changes took place, but I never got a feel for the actual story, the actual plot, if there even was one.

That's a lot of negativity, but there were some things I appreciated about the book. Despite disagreeing with several of Nora's choices, I felt that the dilemmas she faced, the traumas she went through, were all very real. And there were times that I was amazed at the way she composed herself and reacted to, well, life. In Seventh Heaven, Hoffman also gives us a clear, if somewhat exaggerated, view of what life must have been like for a divorcee in the 50s. While this is not an issue I particularly think about, I can see how it might be appealing to some.

Also, despite seemingly trudging/sludging on at certain points, overall it was a fast, easy read. And the reading of it wasn't a completely unpleasant experience. I'd be interested to know if others had a better opinion of this book than I did.

Summary:
Nora Silk doesn’t really fit in on Hemlock Street, where every house looks the same. She's divorced. She wears a charm bracelet and high heels and red toreador pants. And the way she raises her kids is a scandal. But as time passes, the neighbors start having second thoughts about Nora. The women’s apprehension evolves into admiration. The men’s lust evolves into awe. The children are drawn to her in ways they can't explain. And everyone on this little street in 1959 Long Island seems to sense the possibilities and perils of a different kind of future when they look at Nora Silk...This extraordinary novel by the author of The River King and Local Girls takes us back to a time when the exotic both terrified and intrigued us, and despite our most desperate attempts, our passions and secrets remained as stubbornly alive as the weeds in our well-trimmed lawns.

I have heard a lot about her books, but never read one. And I can't say that this is the one I wanna start with ;)

Nice to hear from you, its been a while, a long while, since I last visited.

Having read too many overly long books with characters I didn't like/couldn't relate to recently I think I'll give this one a miss.

The children are drawn to her in ways they can't explain. And everyone on this little street in 1959 Long Island seems to sense the possibilities and perils of a different kind of future when they look at Nora Silk.
Estetik