Who Should Read It? Love a good chick lit with drama, romance, and excitement? Into good music? This book is definitely for you! 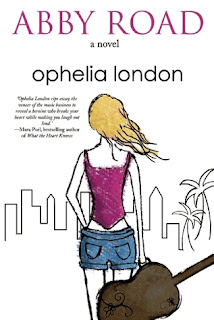 I loved this book! I'll admit that, when I started this book, I wasn't sure what I was going to think. The summary made it sound amazing, but I found the initial writing style somewhat lackluster, and in the first 50 pages or so, things just felt somewhat fake to me. Superficial. That's not necessarily a bad thing, but still. . . And then things picked up, and I forgot all about everything I didn't like about the first 50 pages.

In essence, Abby Road is a coming-of-age story about Abigail Kelly, a famous musician going through a tough time, trying to find herself. She is completely broken which, despite her super-star status, makes her seem like a normal, totally relateable character. She's cute and quirky, with spunk and strength and back-bone, and her reasons for being broken are so real that it's easy to sympathize with her instead of just wanting her to get over it.

That said, I've always been a fan of books during which I regularly want to strangle the main character and scream at her all of the things that she's not seeing and that she should be doing differently. And Abby definitely had her moments. There were many times when I felt as if she was lacking a backbone (and I wasn't the only one, thus the drama of the book), and they were somewhat rough, but overall, they gave a much more real feel to the book.

More than just Abby being a wonderfully broken and lovable main character, Ophelia London really brings not just the characters, but also the places, alive. Abby takes a break from work in Seaside, Florida, the town where her sister lives. The beauty of the beaches and the majestic beach houses are brought to life through beautiful, flourishing descriptions. It is here that Abby meets the love-interest of the story, and the emotions and places are described with such loving care that I felt, at times, like I was there. Or at least I wished I was there, falling in love in the quaint town of Seaside.

Summary:Touted by the tabloids as the biggest rock star of our generation, Abigail Kelly is used to being in the spotlight. But beyond the glam of Hollywood, her world is falling apart. Still reeling from the death of her brother and wilting under the iron fist of Max, her manager, Abby banishes herself to the secluded beaches of Florida for the summer, thinking some anonymity and sunshine are just what she needs. What she finds, instead, is Todd, an ex-marine eager to embrace life after war. Together, Abby and Todd find the balance Abby’s life has been missing. That is, until Max resurfaces, demanding Abby return to Los Angeles to record her band’s newest album. As the pressures of public appearances, paparazzi, and late-night recordings start to mount, Abby will have to risk everything or lose the life she always dreamed of. Ophelia London’s ABBY ROAD is a love letter to music—both the kind you cherish and the kind you create—as well as a beautiful love story that proves even when everyone in the world can recognize your face, the only people who matter are those who can see inside your heart.

Cover Story:
It's super cute. It feels like a new musician trying to make her way in the great state of California, though, which kind of goes against the feel of the book. So, while I like it, it just didn't give me a true feel for what the book would actually be like. It evokes "true beginnings" as opposed to "fresh starts."

Note: This book was sent for me by review from Entangled Publishing. This in no way affected my review.

Oh. By the cover I thought it was a story of a girl moving to a big town to become a star, not vice versa :)
It sounds like a nice read. Thanks for sharing!

Ivana - I know, right? I got the exact same feeling! The book is great, though!

hmsgofita - yes, definitely check it out! :-)