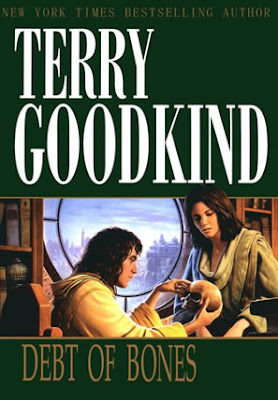 Who Should Read It? Lovers of Terry Goodkind. I would really recommend that you do what I didn't do and read the other Sword of Truth books FIRST.

What I Have to Say: When I started this book, I didn't know that it was a prequel novel. I for some reason thought that it was the first book in the Sword of Truth Series. As such, I felt kind of lost. I mean, it was the before to things that I was supposed to already know, even though they hadn't already happened. That's just a weird feeling. I really wish I would have known so that I could have read it AFTER reading the books.

That said, I really enjoyed it. Not enough to make me feel the need to go immediately read the other books or anything, but enough. Enough to read through the whole thing without ever feeling that I wanted to stop.

BUT, it just felt, well. . .generic. And that could be because I hadn't read any of the other books to be curious about the back story, but, well,. . .I wasn't curious. I never felt like I got to know any of the other characters, and I kept going back to it getting it mixed up with other epic fantasies. It was short, and there just wasn't enough. . .feeling. Again, this could be because I was supposed to ALREADY know and love the characters.

If I could just get over the lack of caring about the characters, it really was a good, solid piece of epic fantasy. The story was convincing and enthralling. It was solid and well thought out, and despite me not loving it so much, it convinced me that Terry Goodkind is definitely an author worth reading.

Summary:A milestone of storytelling set in the world of The Sword of Truth, Debt of Bones is the story of young Abby's struggle to win the aid of the wizard Zedd Zorander, the most important man alive.

Abby is trapped, not only between both sides of the war, but in a mortal conflict between two powerful men. For Zedd, who commands power most men can only imagine, granting Abby's request would mean forsaking his sacred duty. With the storm of the final battle about to break, both Abby and Zedd are caught in a desperate fight to save the life of a child...but neither can escape the shadow of an ancient betrayal.

With time running out, their only choice may be a debt of bones. The world-for Zedd, for Abby, for everyone-will never again be the same.

Discover why millions of readers the world over have elevated Terry Goodkind to the ranks of legend.

Cover Story: Maybe it's just me, but I tend to find all Terry Goodkind covers relatively boring. This one is no exception.
Posted by brizmus at 6:28 PM
Email ThisBlogThis!Share to TwitterShare to FacebookShare to Pinterest
Labels: 3 1/2 stars, epic fantasy

I did like book..7 or something, but that was like 10 years ago. And when the library finally got another I could not remember anything, so this story, eh