Have you entered my Book Blogging to Save Japan contest yet! Do something to help Japan in this time of crisis, let me know what you did (either in a comment or by e-mail - zedster.tbb(at)gmail(DOT)com), and be entered to win! Ending in two weeks, so check it nowish! :-) 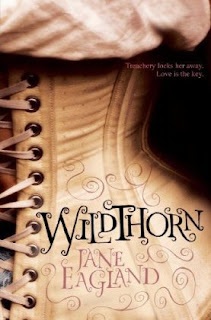 Who Should Read It?
A GREAT book for all fans of YA, especially those that like a lot of intrigue and a bit of mystery.

What I Have to Say:
I really really really LOVED this book, and I desperately wanted to feel like I could give it 5 stars or even 4 1/2 stars. Unfortunately, though, there were just some parts that felt over-contrived. If that makes sense. As difficult as it was to get to the point in which things worked out for Lou, things worked out just a little bit too easily for her. Things always ended up being pretty much EXACTLY as you expected them to be.

That said, this book read SO smoothly. I had barely started before I was finished - almost like I got so into it that I never even really felt myself reading.

The story starts off when Lou ends up at the doors of a mental institution, where she is told she is crazy, and she must be schizophrenic, as she doesn't even seem to know her own name. The more she tries to convince the people there that she is not crazy, the crazier she seems. No one believes her, except for one exceptionally sympathetic worker, Eliza.

This book moves flawlessly back and forth between Louisa's time at Wildthorn, the mental institution, and her memories of growing up with her mother, her doctor father, and her terrible brother. This book moves back and forth between past and present so smoothly that, if you don't think about it too much, it's difficult to know whether Lou's memories are memories or figments of her imagination. Is she actually Louisa Cosgrove? Or is she really the crazy Lucy Childs?

I really enjoyed every aspect of this story, except maybe the love story. I don't want to say too much about it, as I'm afraid it will give to much away, but it really just felt out of place to me. I was totally incapable of believing it, even from a fictional point of view.

Anyway, overall, this book is mysterious, well-written, and full of mystery and intrigue! It will keep you easily reading and excited right up until the very end.

Summary:Seventeen-year-old Louisa Cosgrove longs to break free from her respectable life as a Victorian doctor's daughter. But her dreams become a nightmare when Louisa is sent to Wildthorn Hall: labeled a lunatic, deprived of her liberty and even her real name. As she unravels the betrayals that led to her incarceration, she realizes there are many kinds of prison. She must be honest with herself - and others - in order to be set free. And love may be the key...

Cover Story: It's kind of fabulous. Maybe I'm wrong, but it seems like the corsette might be symbolic for all the different ways that Lou found herself trapped throughout her life. Wonderful cover!

Disclosure: This book was received for review from Net Galley. This in no way affected my review.
Posted by brizmus at 9:53 AM
Email ThisBlogThis!Share to TwitterShare to FacebookShare to Pinterest
Labels: 4 stars, net galley

Scary. I mean being put away like that, I would go crazy just cos of that

I've been wanting to read this one for awhile. Good to know I'll be in for a treat when I get to it! Great review, thanks.

Your enthusiasm for this book has me wanting to read it but I'm also a bit weary because the subject matter sounds really heavy. I think I'll do a bit of research to find out more about it, and perhaps discover at least if there is a happy ending. (in which case I'll probably go for it)

Louisa was a great character. Although she was living during the Victorian era, when women were only allowed to do certain things, that didn’t stop her from wanting to become a doctor like her dad. Her struggle to want to live out her dream is what made me want to read about her.

This book really made me think that I was in the 19th century in Britain. It was probably my favorite thing about it. I absolutely love when a book transports me away like that. If you’re looking for a book to make you forget about real life for awhile, this is definitely the one for you.

This is a perfect example of just another obstacle that will make the people better in the long run. Author and coach Vera Jones touches on these topics and more in her motivational book "
Play through the foul" http://www.youtube.com/watch?v=65z7Yx_8RHA

You can also live chat with the author tomorrow June 21, at U-STREAM. DONT MISS OUT!!

Readers of books in this genre who aren’t very familiar with the history of institutionalisation and disability rights would probably come away with the takeaway that institutions used to be really bad, so it’s good that they’ve been reformed; both so that bad things don’t happen to inmates, and so that people can’t be locked up when they aren’t mentally ill. I’d really like to read a book featuring instutitonalisation in a modern setting with an actually mentally ill character (that isn’t a memoir, like Girl, Interrupted) to see how people deal with the theme when they can’t hide behind ‘well, the character doesn’t belong because she doesn’t have a mental illness!’