Have you entered my Book Blogging to Save Japan contest yet! Do something to help Japan in this time of crisis, let me know what you did (either in a comment or by e-mail - zedster.tbb(at)gmail(DOT)com), and be entered to win!
Below is just one of the many awesome books you have the opportunity to win!

A signed copy of Water for Elephants! 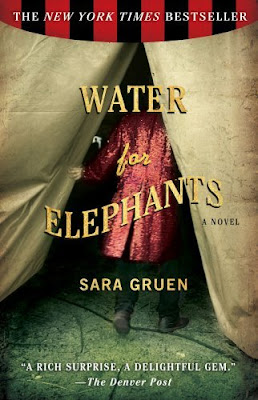 Summary:Though he may not speak of them, the memories still dwell inside Jacob Jankowski's ninety-something-year-old mind. Memories of himself as a young man, tossed by fate onto a rickety train that was home to the Benzini Brothers Most Spectacular Show on Earth. Memories of a world filled with freaks and clowns, with wonder and pain and anger and passion; a world with its own narrow, irrational rules, its own way of life, and its own way of death. The world of the circus: to Jacob it was both salvation and a living hell.

Jacob was there because his luck had run out - orphaned and penniless, he had no direction until he landed on this locomotive 'ship of fools'. It was the early part of the Great Depression, and everyone in this third-rate circus was lucky to have any job at all. Marlena, the star of the equestrian act, was there because she fell in love with the wrong man, a handsome circus boss with a wide mean streak. And Rosie the elephant was there because she was the great gray hope, the new act that was going to be the salvation of the circus; the only problem was, Rosie didn't have an act - in fact, she couldn't even follow instructions. The bond that grew among this unlikely trio was one of love and trust, and ultimately, it was their only hope for survival.

I read and ADORED this book long before I started book blogging. If you haven't read it yet, with the upcoming release of the movie, you totally should. All you have to do is do something to help Japan, let me know what you did, and you'll be entered to win!
Posted by brizmus at 6:19 AM
Email ThisBlogThis!Share to TwitterShare to FacebookShare to Pinterest
Labels: earthquake, Japan, my contests, nuclear disaster, tsunami